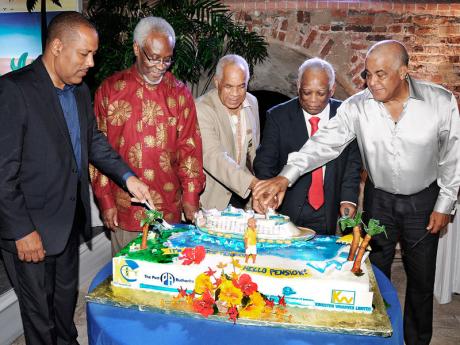 The Shipping industry held a farewell function for former Port Authority of Jamaica (PAJ) Chairman Noel Hylton OJ, on Saturday, November 2 at Fort Charles, Port Royal. At the function, Charles Johnston, member of the managing committee of the Shipping Association of Jamaica (SAJ) and chairman of the Jamaica Producers Group, charted the history of the industry since Hylton joined in 1966. Below we reproduce, in full, Johnston's message.

I returned to Jamaica from university in the United States in 1964, and rejoined Jamaica Fruit and Shipping Company as a trainee manager.

Fruit's office was located on Port Royal Street - the location is now occupied by a car park across from Scotiabank's car park. The building was one storey, with wooden floors, ceiling fans, and shutter windows. It had been owned by Standard Fruit Company (owned by Dole Fruit Company) and was very suitable for a shipping office of the day. Fruit occupied the front of the building, and the Shipping Association's office was in the back and side, with a small staff, as the SAJ's recruitment centre was a few blocks down - where Scotiabank's building now is.

SAJ workers, along with Jamaica Fruit workers, were regular visitors to the garage of the building, where the payroll was prepared and pay delivered. A block away to the east, was the Hanover Street wharf, which was owned and occupied by Kingston Wharves (KW). Other KW piers were at Royal Mail, South Street, East Street, and Railway Piers 1 and 2.

These were finger piers, with sheds on the land side, and cargo was discharged with ships winches and cranes. The cargo was loose bags of flour and rice, kegs of salt fish and mackerel, crates of machinery.When the cargo was discharged unto trolleys on the pier, the trolleys were hooked together then pulled into the sheds by a small motor, which then returned to the ship with empty trolleys. There were no forklifts, everything was done by port workers in the ship and on the shore. Finally, the cargo was again manhandled into trucks or mule drays - that's right, mule drays - for delivery to the consignees on Harbour, Princess and Orange streets.

I have given you this bit of history to highlight what the shipping world was like when Tony Hylton joined the SAJ in 1966. A world of no forklifts, shore cranes, stackers or RTVs.

When you look across the harbour tonight you see the Kingston Wharves, the best multipurpose terminal in the Caribbean, with 1,700 metres of berth space, four Gottwald cranes, 10 reach stackers, numerous yard tractors and forklifts and, the only relic from the past, three sheds which are soon to be removed.

You will see the Kingston Container Terminals, with 2,200 metres of berth, 17 Gantry cranes, 73 straddle carriers, 28 yard tractors, numerous other equipment, and no sheds and only containers, no loose cargo. It has been a huge change between 1964 and the present; and while many have contributed, I think it is fair to say that Tony Hylton has been at the centre of every change and development in this industry.

He was there in 1966 when the Shipping Association, Hugh Shearer, Michael Manley and Hopeton Caven changed the conditions of work on the port, allowing for mechanisation and containerisation, without major strikes and upheavals. Tony has been there with every improvement in labour conditions since 1966 until the present, I might add, not always on the side of the SAJ. He has been the giant of our industry, and more importantly to me, he has been a colleague and friend for all this time.

Jamaica's shipping industry is now on the verge of new changes, one of which is the possibility of development of the logistics inland zones, where cargo is broken out of containers, repackaged, value added and reloaded into containers, then shipped out of Jamaica. This is again a time for new conditions, new rules, new attitudes and practices, especially by Customs, and the regulators are needed.

Tony has retired, but I am sure the new CEO of the PAJ and the ministers of transport, industry and finance, will still seek his advice on this new chapter, which we hope will unfold to the benefit of Jamaica; thereby further expanding his legacy.