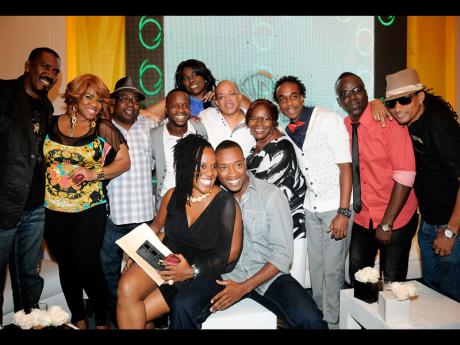 Roasters and the roasted share time in front of the camera during The Roast of Christopher 'Johnny' Daley at The Jamaica Pegasus hotel, New Kingston, on Monday night. - Winston Sill/Freelance Photographer 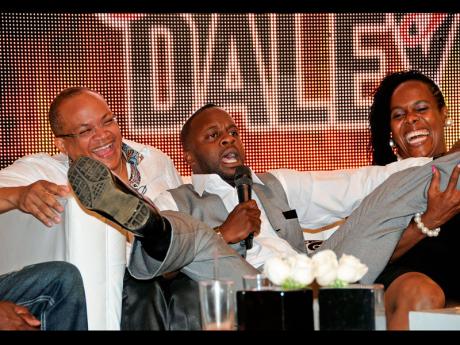 Comedians such as Audrey Reid and the iconic Oliver Samuels who were not in the island, sent their comments and compliments regarding Johnny's career via video footage.

The roast was feisty and entertaining and saw Johnny's comedic colleges poking fun at various aspects of his success and mishaps in the entertainment industry during his lengthy career.

Some of the familiar topics, highlighted during the roast, were Johnny's ragged appearance during his formative years, his former promiscuous lifestyle, his clothing store which sells bed wear for women, and his controversial sex tape.

Other topics brought under the comedic microscope include Johnny's contribution to the development of the entertainment industry, his numerous business ventures and his rigid business ethics.

Dr Abrahams started his comedic attack on Johnny by singing a song with lyrics paying homage to Johnny's 25 years in entertainment. Aside from the flattery, the song also poked fun at Johnny's clothing store. He proclaimed that Johnny was an avid 'panty merchant'.

One of the characteristics of a roast is that the roaster can also insult other roasters.

Duffy began by roasting Miss Kitty. She didn't take too kindly to the comedian poking fun at her weight. She chose to retaliate immediately, disrupting his entire set.

From Duffy's five minutes of allotted time, Miss Kitty took four to hurl insults in response, wasting what could be a good set.

After begging the night's MC Elva Ruddock, for an additional minute, Duffy turned his attention to Johnny, but only had enough time to pay homage to the comedian for his positive contribution to the development of comedy.

Several patrons were perturbed by the disturbance of Duffy's set, but there would be more coming from others.

Elva, though the MC, took every opportunity to throw jabs at Johnny. "Johnny, if you are gonna make a sex tape, sure yu have something fi show ... with yu likkle butta knife ... yu lucky dem mek mi MC in ya tonight," she warned, as the audience erupted.

Next up was Pretty Boy Floyd, he started his set by defending Miss Kitty.

Floyd described Johnny as being cheap and clean, and said it was good that Johnny decided to entertain an event such as a roast, highlighting the importance of giving respect before it's too late.

Pretty Boy Floyd also commented on Johnny's sex tape, admitting that he was inspired by the controversial video.

According to the comedian, he sought to enhance his popularity by making his own sex tape.

However, after setting up his camera and indulging in the act with an unknown female counterpart, he realised that he had forgotten to put a cassette in the video camera.

Dion Slivera was next and described Johnny as her younger brother. The actress, who met Johnny on the set of Lime Tree Lane, says she often felt like a cougar working with Johnny in films where they were required to be intimate, because Johnny is short and always seemed like a little boy.

She revealed that Johnny was responsible for the exposure of several comedians, including Keith 'Shebada' Ramsey, who was discovered through Johnny's Comedy Bus TV show.

During this revelation, somebody from the panel shouted "Yes Johnny, a yu buss Shebada," which again had patrons laughing at the wordplay.

There were very entertaining roasts from Miss Zella, who described Johhny as her ugly adopted son; Miss Kitty, who said Johnny was infatuated with older women; Ice Man, who spoke of Johnny's uncouth sexual behaviour; and String Bean, who said Johnny was a star from an early age.

Ity and Fancy Cat concluded the roast on a high note, avenging their loss to Johnny in the Magnum All-Star $1,000,000 Face Off.

Ity and Fancy Cat accused Johnny of having sexual relations with Elva, in the process describing Elva as a woman with the body of a male body builder. They also said Johnny only grew locks because he was tricked by a female into believing it would automatically make him into a Marley.

As did most of the roasters, the duo poked fun at Johnny's sex tape.

According to Ity and Fancy Cat, the sex tape was boring and Bad Boy Trevor and Milk did better with their efforts.

The man of the night, Christopher 'Johnny' Daley, came next and rebutted several of the disparaging jokes during his two hours in the hot seat.

He also urged leaders to show more support for youth development and reaffirmed his commitment to giving back to the Half-Way Tree Primary School.

During his vote of thanks, a few members of the audience gave donations to the cause. There were guest performances by Alaine and No-Maddz, who attempted a bit of roasting themselves.