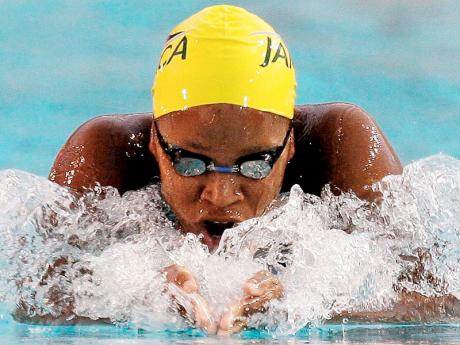 JAMAICA'S Alia Atkinson continued her magnificent displays on the global swimming tour, as she went close to the world record and won a gold medal and a bronze on the final day of competition at the FINA World Cup in Singapore yesterday.

The successes, added to her 100m breaststroke win on Tuesday's first day of action, made Atkinson the top performer in Singapore after finishing with two gold medals and a bronze at this the sixth of eight legs in the 2013 FINA World Cup.

Yesterday, Atkinson first won gold in the 50-metre breaststroke, topping the event in a personal best 28.94 seconds, which is 0.14 outside the world best held by American Jessica Hardy.

She finished ahead of reigning world champion Iuliia Efimova of Russia, who got the silver in 29.25. Germany's Dorothea Brandt was third in 30.39.

Later in the evening, Atkinson returned to mine gold in the 100m individual medley (IM) in somewhat sensational fashion. The medley is swum in the order of butterfly, backstroke, breaststroke and freestyle. Atkinson was seventh at 50 metres, more than a second behind the race leaders - world record-holder Hungarian Katinka Hosszu and Australian Alicia Coutts. However, the Jamaican set the pool on fire with her last 50 metres. In the end, Hosszu won gold in 58.29, Coutts silver in 58.32 and the fast-finishing Atkinson flew to take bronze in 58.42.

Her time is also a new personal best and the fastest ever by a Jamaican woman.

"This is the first time I'm competing in every single meet in the series. I always hope to improve my timing from the first to the third leg in each cluster, so I'm very happy with the timings I've clocked in this first leg and hope to continue improving at Tokyo and then Beijing," Atkinson said of the two remaining meets.

"I'm a big fan of the Asian cluster and I'll definitely want to be back, especially in Singapore and Japan. The atmosphere makes it a great place to be," added Atkinson, who has moved up to second place in the overall World Cup rankings behind Hosszu.

She will next compete in Tokyo, Japan, on November 9-10 and in the final FINA World Cup 2013 series meet in Beijing, China, from November 13-14.