Let Little Dunn's River be our line in the sand 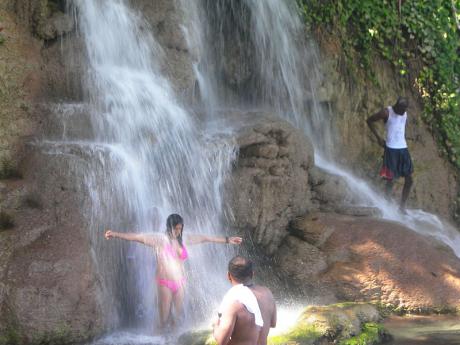 The Ocho Rios Ministers' Fraternal is taking issue with the way the Urban Development Corporation (UDC) is proceeding with its proposed development of the Belmont property commonly known as Little Dunn's River in Ocho Rios, St Ann.

We have concerns that were registered by members of the fraternal, all ministers of religion, who first staged a protest at the site on October 15, 2013 and then in subsequent correspondence to the UDC management. We would like to outline the issues we believe are at stake in as much as we are of the view that the implications are great and grave for our growth and development as a people.

The steps the UDC has taken in recent weeks to, supposedly, effect the development of the land reflect an undisguised intention to hinder the access that it affords to the beach and falls used by the ordinary Jamaicans for recreational purposes. On any given day, scores of persons trek to and from this facility, and on weekends and public holidays, hundreds descend on it, many coming by buses, an indication that persons from outside the immediate Ocho Rios, or for that matter St Ann use these facilities.

This wide and extensive use of the site could be due, in large measure, to the fact that it is the last remaining sliver of beach spanning from Portland to St Ann's Bay that the ordinary person can use unhindered.

The actions of the UDC in recent times to post guards at the site, erect a fence with a locked gate, putting up no trespassing signs on the property, and instigating the mounting of no parking signs on the strip of road adjacent to the property have all served to curtail the use of the facilities by the public.

There is reason to believe that these steps, taken by the UDC, are designed to not only deny access during the proposed development, but that the development is being designed to deny access to the ordinary Jamaican, many of whom have been using this facility for decades.

The Ocho Rios Ministers' Fraternal would like to register our objections to these developments and to state our intentions to resist any move to, whether in the short term or long term, deny the public unhindered access to these facilities, as we believe they are counterproductive to the meaningful growth and development of our people.

Our stance on this matter, we believe, represents the sentiments of a vast majority of our people.

It should be understood that the fraternal is not opposing the development of the property. We support any development that will redound to the well-being of all Jamaicans. We are not, however, convinced that this one is moving towards that end in as much as the approach of the UDC has already created or exacerbated feelings of resentment among many ordinary Jamaicans, who see this as another in the series of developments in the name of tourism that leaves them feeling excluded and alienated from Brand Jamaica.

The alleged illegal activities involving the fleecing of tourists by persons who operate the site as an attraction has been completely curtailed by the placing of guards at the site. It is of interest to note, however, that one of the supposed illegal operators assisted in the construction of the fence, which indicates, among other things, that they are neither antagonistic to, nor unwilling to, cooperate with the UDC and its planned development They are simply, ordinary Jamaicans asking not to be excluded from the development. We don't think that they are being unreasonable.

That the inadequacy of proper sanitary facilities poses a public health risk must be taken seriously, and the fraternal is proposing that the UDC, as a matter of priority, upgrade the existing facilities, a solution that was proposed on public television by the current minister of tourism when he toured the site not too long ago. We support Minister McNeill's proposal as we believe that this is not too much for the UDC to invest for the well-being of our people.

But if they consider it too much, the members of the ministers' fraternal are prepared, if allowed, to provide these facilities because we believe that there is a lot more than access to this facility that is at stake in this matter.

It is the pride and dignity of our people that is at stake here. What has caused anger among many who have never even used these facilities is the extent to which they, as ordinary Jamaicans, feel diminished and devalued by these so-called developments that are designed to marginalise them. People are feeling like second-class citizens in their own country, or that they don't belong.

The way we have gone about development, especially of our tourism product, has caused serious assaults on our dignity as a people, robbing many of their self-confidence, creating self-doubt, self-hate, which place us on the road to self-destruction.

Maybe the time has come for us to not just do environmental assessments to determine the impact of development on the environment, but to do some kind of psychosocial assessment of proposed developments to determine their impact on the psyche and mentality of our people, as I am convinced that some developments serve only to reinforce negative stereotyping of the ordinary man, entrenching the mental slavery that for too long has held us down.

Such a study might include an examination of the quality of jobs to be offered to Jamaicans by these developments, as the employment conditions being endured by many Jamaicans in the tourist industry are in need of serious investigation. We suspect that much of it could, if not illegal, be bordering on dehumanising.

It may be the irony of ironies that our tourism interests are doing everything to insulate visitors from the ordinary people, when the same visitors, time and time again, indicate that the best part of our product is our people. Obviously the visitors are not prepared to define us all by the few among us who from time to time commit acts of skullduggery. Why then are our own treating us as if we are all hoodlums and hooligans?

Despite our appeals to do otherwise, the UDC kept the lock on the gate to the property over the National Heroes weekend when we celebrated the work of our forebears in securing freedom and dignity for all of us as a people. This was an affront to the legacy they bequeathed us.

We desire to have dialogue with the UDC on this matter to resolve the issues, but are prepared to use other measures, if necessary, to resist any attempt to use this development as a way to further demoralise and devalue our people.

Little Dunn's River should be our line in the sand against any such development in the future. We are, therefore, insisting that any development of the Belmont property, aka Little Dunn's River, must not in any way deny access to the existing facilities of beach and falls to the ordinary people who have been enjoying it for generations.

As an act of good faith and out of respect for the legacy of Marcus Garvey, a son of the soil, the UDC ought to, without further delay, remove the lock from the gate. The no-parking instituted for the area should not be enforced as it is safer to park there than it is to park at the Dolphin Cove attraction where no such enforcement exists. The no-trespassing signs on the property could be replaced by signs disclaiming liability for injury or damage to anyone using the property.

The vast majority of our people will never qualify for a visa to migrate to any other country. Indeed, most would not get a visitor's visa to go anywhere else to enjoy a vacation even if they could afford it. Many who would qualify have no such desire.

It is for such persons we speak when we say we want to feel that we belong here and that here belongs to us. Such a sense of belongingness is essential for any sustained and meaningful development of Jamaica, the land we love.