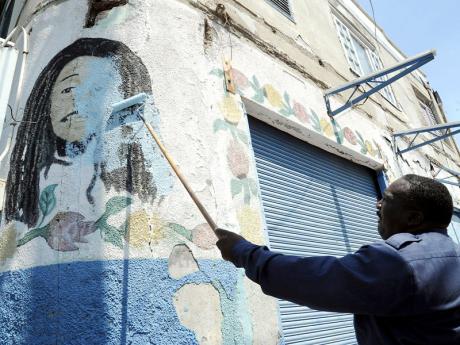 A policeman paints out the mural of Glenford 'Early Bird' Phipps which was on a building at the intersection of Beeston Street and Matthews Lane in west Kingston in February.-Norman Grindley/Chief Photographer

For some years now, the Jamaican police have been painting out murals in working-class communities in a symbolic battle with residents. Now the story has gone global.

According to tongue-in-cheek news stories in The New York Times, the Washington Post and elsewhere, police wearing battle fatigues and carrying paintbrushes have entered Kingston's "notorious slums" and covered images "celebrating leaders of Jamaica's violent underworld". Police claim that the murals "immortalise criminal elements and dons". In an interview on Jamaica's CVM TV, the police commissioner stated that they plan to remove everything symbolic of gang presence.

Judging by the public silence, many agree that destroying the murals will somehow help to obliterate donmanship. Perhaps this is understandable, given the fact that we're all tired of living in fear and we're tired of the global media marketing the idea that all Jamaicans are pathologically violent. It is hard then to ask what other meanings the police 'clean-up operation' might carry, or to suggest that we have much to learn from the murals themselves.

The fact is that there is a vibrant popular community art movement in Jamaica and the street murals are part of it. Those who wield power ignore it at their peril, for, as with the destruction of all popular movements, violence is likely not to stamp it out but rather to strengthen it.

The destruction of the murals is an act of violent censorship of a popular street-art movement in Kingston in the guise of law enforcement. It is a violation of the right to freedom of expression that is guaranteed in the Jamaican Constitution. We may not like the murals. We don't have to. That is not the point. Not liking them is not the same as denying the right of self-representation.

Brute force, threats and violence will not halt the crisis of violence in the region. It never has. The way forward depends on sustained dialogue and mutual recognition between ordinary people, the police and all other social institutions, in the context of an absolute commitment to social justice for all. Not justice for some, but not others. Not dialogue with some, but not others. This slow process of careful relationship building takes time and hard work that threats and 'out-badding the bad' only impede.

The mural movement in Jamaica is part of the global street-art movement. To see the murals (at least before the police incursions), all you had to do was step off the main road into any working-class community. The murals are not the same as graffiti. Many are carefully crafted and fall into four types.

The first set depicts community heroes such as successful reggae artistes, businessmen and sports people. A second set depicts political figures. These tend to be local activists who have championed the community or international black anti-colonial, political heroes such Marcus Garvey, Leonard Howell, Haile Selassie, and others. There are a few national politicians. A third grouping consists of religious images often with Rastafari themes like the Apocalypse, the Last Supper, and the Black Madonna and child.

The fourth group is made up of commemorative murals (aka sunrise and sunst murals). These portray community members who have died - sometimes but not always - violently. These can be found in all communities, regardless of party affiliation. There are memorial murals to police who come from the neighbourhoods and who have fallen in the line of duty.

There are murals of area leaders, ordinary community members and big or little dons. Jim Brown and Claudie Massop fall into this latter category, and, like many others, appear on the walls of their communities.

But there are also murals on the exterior walls of dwellings of family members who have lost loved ones to violence. There are murals of schoolchildren who have been killed accidentally in crossfires, or whose lives have been taken because they witnessed a murder or were killed as an act of reprisal.

murals of those shot dead

Finally, there are murals of those who have been shot dead by the police. Sometimes a verse from the Bible accompanies the image. One such mural was for a 15-year-old shot to death by the police while riding his bicycle in the market in a bungled operation over a decade ago. The mural was on the wall outside his family home and was painted out in 2012.

Another mural painted out a few weeks ago was that of D, executed several years ago by a special force of masked police who shot him dead in his bed before day. D never had the benefit of a trial, so we don't officially know what he was wanted for or if he was innocent or guilty. Even legendary cold war bad man Jim Brown of Tivoli died under highly questionable circumstances in prison.

To remember Brown is to bring back into public memory a history of conflict that few want to recall because we might be confronted with some difficult answers to the question: Where does 'badness' spring from? What forces brought enforcers like Brown into being, and what forces enabled his power to be reproduced after death? What constellation of local and global forces facilitated his rise to mythical status? For indeed, behind every outbreak of community violence and every attempt to address it, there is a link to powerful global interests.

We might consider the way figures like Jim Brown reproduce themselves globally in many settings, from the high seas off the Horn of Africa to the forests of Colombia to the trails of Afghanistan and deserts of Mexico. Surely then, the factors that enable 'badness' in so many places cannot just be local. All indications are that it has something to do with how the global economy has wasted the lives of millions in unprecedented ways that also require local collusion. And there, the trail the police are following may well turn uptown and they may have to turn their gaze to the walls of the wealthy.

These are well guarded by security companies whose marksmanship is cheerfully advertised in billboards all over uptown Kingston. Nobody asks for permission for security companies to display images of brutality all over Kingston. Nobody complains about the men in company uniform brandishing artillery. It is 'natural'. Business as usual. Cops don't paint out these corporate glorifications of private violence.

Whose violence then is really being obscured by all this police paint? Since when, and in what societies, do the police or the armed forces get to make decisions about art? The answer to this is chilling - Germany under the Nazis, Argentina under the generals, the USSR under Stalin, and so on.

Indeed, one young man from a community of many murals remarked, "I need these murals. They show me the path I do not want to go down. They remind me of all I want and do not want for my life."

Some of the murals can be read as covert statements against police impunity and against police methods. But this doesn't mean communities are against the police per se. If this were true, police from inner-city communities would not be memorialised. But they are. They, too, are mourned and remembered. Nevertheless, it is well known that Jamaica has a high rate of police violence that undermines public confidence in law enforcement.

The spectre of armed men in battle fatigues painting out street murals is not likely to change that. How does painting out the image destroy what it depicts? How does the destruction of street murals call perpetrators of violence to account for wrongdoings? Censorship in the guise of law enforcement is a fundamental violation of the rights of all citizens that perhaps says more about an absence of real power than its presence.

Popular art in public spaces springs up when people want to counter the inaccuracy of dominant stories about them. It springs up where their side of the story is misrepresented, even as their basic rights to employment, education and respect remain unmet.

Whitewashing commemorative murals is an act of intimidation. It censors the inconvenient stories of communities. It is the kind of behaviour that has helped turned vibrant communities into deathscapes.

Honor Ford-Smith is associate professor of community and environmental art in the Faculty of Environmental Studies at York University, Toronto, Canada.