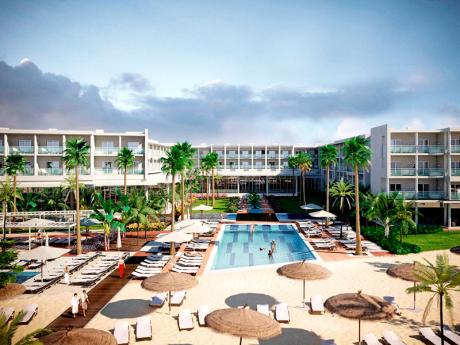 The 238-room resort, in the tourism capital, Montego Bay, St James, is on target for a December 6 opening and its regional sales manager, Niurka Garcia-Linton, is already reporting 60 per cent booking.

According to Garcia-Linton, this figure is estimated to reach a high of 80 per cent during Christmas and the New Year.

She said the strong pace in bookings is because of guests she describes as "collectors". These are guests who, "once they stay at one Riu Palace for instance, they want to experience the others," said Garcia-Linton.

The vibrancy of the hotel chain's source markets also accounts for the vigorous advanced bookings.

Garcia-Linton was addressing members of the media during a tour of the new facilities last Friday.

The hotel neighbours the existing Riu Montego Bay, and its guests (Riu Palace Jamaica) will have access to the facilities at the sister property.

The new resort is not the only hotel that the chain will offer an adult option to. Within months, the deluxe wing at ClubHotel Riu Ocho Rios will cater to adults 18 years and over, said the group's director of sales, Angella Bennett.

She pointed out that this latest investment by the group, which is now Jamaica's largest all-inclusive operator, is valued at US$43 million. This money includes the cost of construction, purchase of the land and equipment.

The director of sales outlined that although Riu Jamaica Palace will be the smallest in the group of five resorts on the island, service here would be more personalised and clients will enjoy great attention to detail.

The property will offer three categories of rooms, junior suites, suites and jacuzzi suites with a modern design, a relaxing atmosphere, and beautiful sea views.

"Guests will also enjoy all the quality features clients expect at a Riu Palace Hotel, such as 24-hour room service, full-size bottle liqueur dispensers, separate shower and hydromassage bathtubs, bathrobe, 42'' flat-screen TV, free Wi-Fi and the fully stocked mini bar, all of which is included in the All-Inclusive by Riu programme," said an elated Bennett.

These will be complemented by three bars, two fabulous swimming pools with chill-out areas, a gym, a conference room and free Wi-Fi throughout the property.

"And what is best, all the guests can also enjoy the facilities of the neighbouring Riu Montego Bay Hotel, such as the theatre with live music and shows every night, the complete Renova Spa, the sports bar and the disco," stated Frank Sondern, general manager of both resorts.

Excited about the prospects, Sondern announced that some 200 additional staff would join the current workforce of 2,000 now employed to the chain locally.

"And this does not include indirect jobs created from the spa, the taxi and transfer drivers, the travel agency representatives, the suppliers, etc," said Sondern.

It's been 12 years since Riu opened its first hotel in the island. At that point, it was the first Spanish hotel company to do so, and all its colleagues and partners told owner Luis Riu the idea was crazy.

"Time and events have proven them wrong. Jamaica has addressed the major concerns for the international tourists and has grown in professional services and infrastructures.

"The beauty of its beaches, its wild nature, the charisma of its people, and the culture and reggae music did the rest," Luis Riu told The Sunday Gleaner recently.

Today, Jamaica has no reason to envy other destinations in the Caribbean, he said, adding that his clients and tour operator partners allowed the brand to grow with the confidence of increasing the clientele they will attract.

"For that purpose, we are renovating and upgrading our existing properties, as well as specialising in the 'adults-only' segment with this new hotel."