A burdensome shock for Shaw's camp 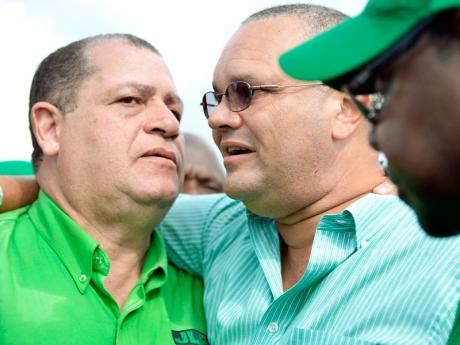 IT WAS textbook Peter Phillips' 2008 leadership challenge to Portia Simpson Miller - big spend, talk, hype, loss - as delegates of the Jamaica Labour Party (JLP) settled the leadership by a big margin of 692 votes in favour of Andrew Holness over Audley Shaw.

Less than 30 metres separated the two camps along parallel lines in the car park of the National Arena.

It was a gathering of Labourites, and there was no shortage of shirts, music, and outrageous dress for incumbent and challenger.

"Today is about the future of the Labour Party," said a well-spoken and well-dressed woman when The Gleaner eavesdropped into a conversation under the Holness tent around 8:25 a.m.

She wore nothing to indicate that she was a delegate, and if she were, none of her 10 fingers bore any electoral ink.

"Audley has a place, but the future belongs to our young …," she continued. But the woman to whom she spoke appeared disinterested. She then got up, said 'excuse me' and my eyes followed her through the gates and came back to the lady with whom she tried to speak.

Known by the arm band

The woman was seated on one of the hundreds of chairs provided by Holness with quiet confidence, arms folded and legs crossed.

She had voted and was waiting for an arm band, which when the under-skin was removed, displayed a number. The arm-band hand-over was repeated, over, and over again and the observation, when pointed out to Harold Brady brought a huge smile to his face.

That was how the Holness camp kept count of delegate votes.

Delegates voted and returned to their respective camps for the arm band which qualified them for a meal or more.

Over in Shaw's camp, the line towards the food was consistently long. People sat with arms full of boxed food, and huge belches rocketed the early morning.

The "refreshment" cards were torn when issued, and that was how they kept count, but the process was breached and cards were issued to all and sundry.

"We bussed people here at great cost. We had them overnight in Kingston at great cost and after they voted, they turned up in Andrew Holness shirts," said Dennis Meadows, supporter of Shaw.

It was a bitter campaign and the shock was burdensome.

The healing will be up to the leader and contender.

"We have to look back and reassess and, in the end, what we all want is a united Jamaica Labour Party to become the next government of Jamaica. We are all gonna have to work towards that," said Delano Seiveright, former head of Generation 2000 (G2K) and member of Shaw's team.

"We can run the campaign, and we can do the canvassing. If the votes did not go into the box, we can't be blamed for that," said Ruddy Spencer, who also backed Shaw.