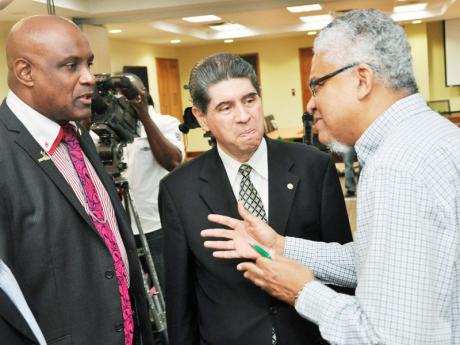 Professor Nigel Harris (right), vice-chancellor of the University of the West Indies, addresses Fritz Pinnock (left), executive director of Caribbean Maritime Institute, and Jorge Enrique Constatino Gonzalez, ambassador of Panama to Jamaica, at the 'Logistics Hub: The Economy vs The Environment' symposium, put on by the Caribbean Maritime Institute in association with UWI. - Jermaine Barnaby/Photographer

One of the country's leading economists is questioning whether or not Jamaica will reap any real benefits from the proposed logistics hub.

China Harbour Engineering Company is proposing to construct a US$1.5 billion trans-shipment port and industrial and commercial zone which would include Goat Islands and lands north of the islands in the Old Harbour Bay area which has sparked a robust debate.

Speaking at Saturday's symposium put on by the University of the West Indies (UWI), Mona, and the Caribbean Maritime Institute to look at the economic and environmental impact a logistics hub could have on Jamaica, Dr Damien King, head of the Department of Economics at UWI, argued that the logistics hub must be framed within the context of Jamaica's meagre economic performance over the last 40 years.

"What we need to know is what is the reason why Jamaica has been the worst-performing economy in the world environment, so that we can know whether the hub is going to be the solution to that problem or part of the problem," King noted.

The economist said the country has been proceeding on assumptions and until the problems besetting the economy are seriously analysed, then the logistics hub will face the same infrastructure weaknesses and financial insecurities like other major projects encountered in the past.

However, chairman of the logistics and investment task force, Dr Eric Deans, said special economic zones will be created to ensure different areas of the economy are incorporated in the hub.

"When we speak of the logistics hub, it's not just to benefit large corporations. Within the economic zones, and we see it throughout the world, 70 to 80 per cent of the companies in these economic zones are in the MSME (micro small and medium size enterprises) sector," Deans noted.

He said this was how the average Jamaican would benefit from the logistics hub.

However, King argued that these economic zones may become special tax-free centres that the rest of the country not involved with the project would be required to fund.

"When I hear about special economic zones, it tells you that we are going to create an enclave of no taxes that everybody else is going to have to pay taxes for," King noted.

Dean dismissed this suggestion, noting that all the applicable fees for operating businesses in the country would be applied.