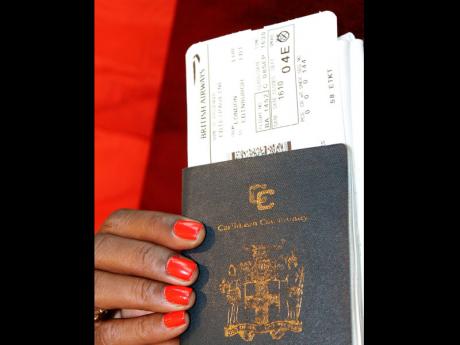 The Jamaican passport has moved up seven places in a global ranking of passports, to the 52nd most valuable passport in the world in terms of how many countries will allow its holders to enter without a visa.

But it is also the lowest ranked of English-speaking Caribbean countries, at one spot below the Guyana.

A Jamaican passport entitles Jamaican citizens to travel visa-free to 77 countries out of a total of 219 according to the Visa Restriction Index - Global Ranking 2013. The index was created by Henley and Partners, a global residential and citizenship consultancy which advises wealthy clients who want to gain citizenship for a second passport.

The list was created under regulations valid from July 2013.

The ranking puts the Jamaican passport about halfway between a British passport at number one and an Afghan one ranked last at 93th.

The index shows that there are at least 139 other countries and territories that Jamaicans cannot visit with a visa. It shares its current rank with Kuwait in the Middle East; the Republic of the Marshall Islands in the northern Pacific; and Ukraine, the largest country in Europe which was previously a former state of the Soviet Union.

In the 2012 index, Jamaica ranked 59th and could visit 77 countries, but was higher than Guyana which was ranked 60th with access to 76 countries.

But there are still a few passports in the region from non-Commonwealth, non-English speaking countries that rank lower than Jamaica. The four are: Dutch-speaking Suriname at 56th; Cuba at position 66; Dominican Republic ranked 74th; and at the bottom of the Caribbean pile is Haiti, which is ranked 80th and can visit only 46 countries.

Haiti is one of a few countries which allows Jamaicans to visit without a visa, without a reciprocal arrangement, according to statistics from the Passport, Immigration and Customs Administration (PICA).

On the global rankings, the United States is second behind the UK, Finland and Sweden which shared the top position. Holders of any of those three passports can visit 173 countries without visas. Americans are able to visit 172 countries visa-free.

Jamaica benefits from its association with the 53 other nations that make up the Commonwealth, as most of its members do not require visas for Jamaicans. The Commonwealth countries that do require Jamaicans to have visas include Canada, the UK, Nigeria, India, Ghana, Australia, New Zealand, Brunei Darussalam, Cameroon and Namibia, according to PICA statistics.

Most South American and Central Americans countries don't require Jamaicans to have visas either, with one glaring exception being Brazil, according to the PICA site, which was last updated in March.