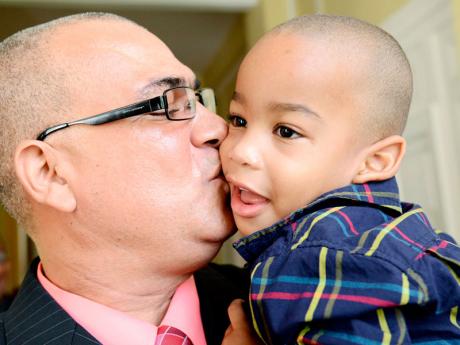 Richard Azan kisses his grandson, two-year-old Abraham Johnson, minutes after being sworn in by Governor General Sir Patrick Allen as minister of state in the Ministry of Transport, Works and Housing yesterday. - Ricardo Makyn/Staff Photographer

IF HE were a preacher, Richard Azan's next sermon would perhaps be taken from Romans 3:23, which says all have sinned and fallen short of the glory of God.

The North West Clarendon member of parliament, whose reappointment as state minister in the transport, works and housing ministry yesterday was met with condemnation from the Opposition and members of civil society, said he is deserving of forgiveness from mankind.

The Reverend Paul Gardner, chairman of the Jamaica Civil Society Coalition, told The Gleaner yesterday that Azan has not expressed regret for his actions and his reappointment is a blow to good governance.

"I have not heard from Richard Azan an expression of mea culpa - a coming to say I have (done) wrongs and I seek the forgiveness of this country," Gardner said.

"What I am getting is a kind of arrogance that is distasteful," he added.

Although not a water-baptised Christian, Azan said the sin of denying the existence of God is the greatest any man could commit, and despite that, God has found it possible to forgive them.

"If God is so good to us; He gives us breath, and you say there is no God, and (yet) God still forgives them for them to be alive," he said.

Azan resigned as junior minister in mid-September for his role in engaging a private contractor, John Bryant, to construct 10 shops at the Spaldings Market last year. The Office of the Contractor General said the shops were constructed without permission from the Clarendon Parish Council and that rent was set and charged without proper consent.

Director of Public Prosecutions Paula Llewellyn, after reviewing the matter, said there was no basis on which to charge Azan with conspiracy to defraud the Clarendon Parish Council in relation to the matter.

Azan told The Gleaner the last few months have seen him doing some reflection and exalting the goodness of God.

"Everything happens for a purpose, and when my God makes a decision, I am satisfied with what He does," Azan said.

"God is God and God is Good and God will do whatever He wants in the right time. I don't worry what people say about me. I know the truth comes from above," Azan said.

Azan told The Gleaner he was not surprised by calls for him to have been kept out of the executive.

Gardner, meanwhile said every person is redeemable, and has sought to counsel Azan about the matter of redemption.

And as Azan prepares to carry out his duties as junior minister, Floyd Green, president of Generation 2000, the young professional arm of the Jamaica Labour Party, said the reappointment is "a disgraceful move and another clear sign of the contempt that the prime minister (Portia Simpson Miller) and her Cabinet have for the people of Jamaica, the Office of the Contractor General, and the concept of good governance".

Azan told The Gleaner that he has had time to reflect on his actions and said there will be changes to the way he approaches aspects of his job.

"What I plan to do now is that every 'I' will be dotted and every 'T' will be crossed. … The thing is that I am not going to allow anyone to stand in the way of development for their own selfish purpose."

Sandrea Falconer, minister with responsibility for information, sought to defend Azan's reappointment, saying persons should not be crucified for making mistakes.