Tanya Stephens happy in 'The Bubble' 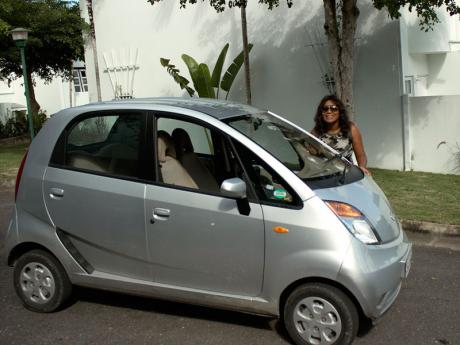 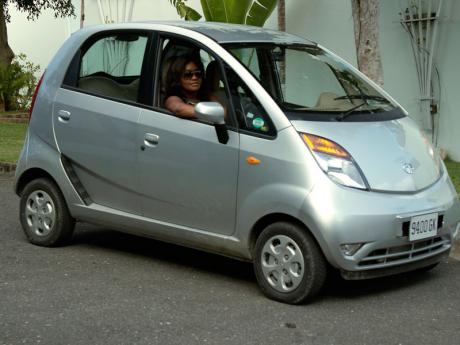 Those who live the high-profile life are often expected to steer a similarly positioned ride. And there are those who do. But there are others who choose the unexpected - and even the unusual - for their wheels. And there are those who match their cars to those of their peers. Starting today, Automotives will take you along for a ride on the unusual motoring side of public figures, starting with the lovely lyricist, the sharp-witted Tanya Stephens.

It's not the usual car for a well-known entertainer to drive, but Tanya Stephens loves her 2013 Tata Nano, nicknamed 'The Bubble', which is her daily ride.

Stephens told Automotives she purchased it in June - and has been subjected to some laughter since, but she has been handling the attention with her accustomed aplomb.

"At first, it was like amusement, and then it moved to fascination. People look at the car and laugh and I look back at them and laugh louder, because I say, 'Look at you. You are such an idiot'," she said with a chuckle.

Stephens has always wanted a car on the smaller side.

"I've always loved small cars. I fell in love with them seeing them in Europe. Dem park so easy and drive so easy. It's much more convenient than the type of car I usually go for, and I don't really have any small kids anymore, and I have no crowd, and I have an allergy to high gas prices," she joked.

Before her Nano, Stephens only drove large vehicles, but The Bubble has made such an impression she may sell her current pickup.

"I used to drive a Lincoln Navigator. I came from Prado and Avalanche. Before this, the smallest car I had was a Toyota Rav4. It tek a little bit of adjustment, but not much, though. I'm actually stepping away from the bigger vehicles. The other vehicle I have is an Avalanche, but I'm thinking about getting rid of it, so the only car I will have is a Tata," she said.

Stephens was reluctant to compare The Bubble to other vehicles.

"I think it's unfair to compare them. I wouldn't use the Tata to knock any other vehicle. They all have their puposes. It drives really good, though. It's, of course, stick shift, so for nuff people out there who think dem a driver, it wouldn't work - especially females. And I know I'm a girl, so I'm not knocking my gender, but a no all of we can drive stick," Stephens said.

Complimenting the car, Stephens said, "It handles
really well. I slow all the way down in gear to almost stopping,
without it shutting off or shaking."

Parking is easier
for the These Streets singer and she lauds the fuel
economy. "Parking is awesome. You know in Jamaica it is very signature
of us to have some very small parking spaces. I now fit perfectly in
them with space on both sides of me, so even the worst driver coming
doesn't have any excuse to lock me in or lock me out," Stephens
said.

In addition, she said, "At first, it was alien
to me to pull up to the gas station and ask for a $1,000 gas. When mi
buy $1,000 gas, more than likely it full it back all the way up, because
it takes less than $2,000 to fill the tank. So mi drive and drive and
forget gas stations, so I'm absolutely loving that. I'm not that type of
person to prove that I have $1 by spending $2. It doesn't make sense to
me. What makes sense is saving the dollars," Stephens
said.

There is, however, a saving of another kind
which sometimes comes in for ridicule.

"People don't
like the stigma of cheap. It's affordable, but some persons will call it
cheap. Relative to other vehicles, the price tag is much lower, yes.
I'm not here that much. I'm not going to be around very often. So, for
me, to park a multimillion-dollar vehicle in a parking spot to gather
dust doesn't really make sense," Stephens said.

"With
this, it is not a big investment. It's not big maintenance, but I really
do love the car, and it has lived up to my expectations. People said it
can't take a lick, but I'm not in the habit of taking licks anyway. Mi
no want a lick in nothing," Stephens joked.

Stephens
has been acting as an ambassador of sorts for the Nano, as she offers
test drives to close friends.

"The number of people
who test drive my car, Tata need fi pay me. All of my friends. First of
all, dem laugh. Dem say dem can't picture you in this. Me in a small
vehicle, it doesn't detract anything because mi personality much bigger
than any vehicle mi go inna anyway, so mi no need fi compensate because I
lack nothing," she said.

Tanya Stephens is set to
release the album Guilty on December 20. The first
release party is set for December 5 at Pier One in Montego Bay. The
December 6 staging will be at White Bones Restaurant in St
Andrew.