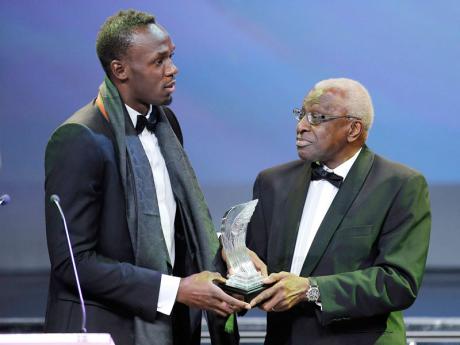 The International Association of Athletics Federations (IAAF) and the World Anti-Doping Agency (WADA) aren't quite seeing eye to eye these days.

President of the IAAF, Lamine Diack, has added his voice to what has been described as a ridiculous campaign against Jamaica and Kenya.

Diack, speaking to journalists ahead of last night's IAAF Gala and Awards ceremony at the Salle des Etoiles here, insisted that the heavy-handed approach and focus by WADA on Jamaica was unwarranted and believes it to be part of a larger attack on the sport of track and field.

"Stop all this nonsense!" said Diack. "Everyone knows the strength of Jamaica in the sprinting, especially, it didn't start in Usain (Bolt).

"I read in the newspapers and it was like a campaign against Jamaica and I think it was ridiculous," Diack added. "They are the most tested athletes in the world!"

The IAAF boss also put to bed arguments that countries like Jamaica, who had featured in WADA's crosshairs over doubts in the integrity of its drug-testing machinery, could be barred from competing at the Olympics in the absence of improvements.

But Diack stressed "I read in the newspapers how WADA are going there and they are going to suspend (Jamaica from the Olympics). "They cannot suspend anybody!"

Diack added: "After Jamaica they (WADA) went to Kenya because some doctor went there and said the Kenyan athletes are not controlled. They are the most controlled ... 650 or so athletes controlled every time in and out of competition."

WADA has since publicly criticised the island's drug-testing programme. They recently sent a team to the Caribbean island to look into its anti-doping system and released a statement on November 14 stating compliance. WADA also noted that the Jamaican Government will be implementing certain recommendations.

A few days ago, IAAF deputy general secretary stated that he believes that the anti-doping watchdogs were unfairly targeting Jamaicans and undermining the sport and the IAAF's own anti-doping efforts.