'We will not back down' - JCF says members remain fearless, prepared to fight criminals 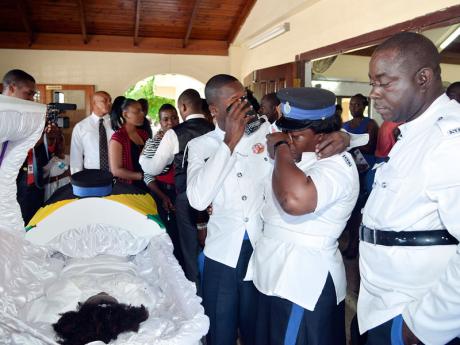 Members of the Island Special Constabulary Force in tears as they view the body of their former colleague, Ariana Henry, who was shot and killed by gunmen in her Portmore community in St Catherine last month. The thanksgiving service was held at the Braeton Seventh-day Adventist Church in Portmore yesterday. - Norman Grindley/Chief Photographer

They wept openly for a fallen colleague, but amid the hurt and the pain, one member of the security forces delivered an ominous warning to criminals.

"We will stand resolute in our duty to Jamaica, and we will fight back," vowed Taylor, who collapsed in tears after completing her tribute during the service for Henry at the Braeton Seventh-day Adventist Church in Portmore, St Catherine.

Constable Henry, who enlisted in the Island Special Constabulary Force just over three years ago, and was attached to the Darling Street Police Station, was shot several times while talking to a colleague outside her home in Portmore, St Catherine, on October 25.

Invoking the words from the poem 'If We Must Die', by renowned Jamaican poet Claude McKay, Constable Taylor exhorted her colleagues to stand brave in carrying out their sworn duty.

"Colleagues, we must protect Jamaica, that is what we swore to do," she reminded.

"'If we must die, let it not be like hogs, hunted and penned in an inglorious spot ... . If we must die, oh let us nobly die, so that our precious blood may not be shed in vain'," Taylor continued.

She took aim at critics who have long argued that police personnel are too trigger-happy.

She further said that although the justice system is "slow and archaic, we will trust it and hope that Ariana's killers get what they deserve".

Commissioner of Police Owen Ellington, who was in attendance, disclosed that several persons implicated in Constable Henry's killing are now in custody.

Pastor Kemar Douglas, in his sermon, said the brazen attack on a law-enforcement personnel is an indication that "our nation is in serious trouble."

"If we as a people are to rise up out of the quagmire state that we have found ourselves in, civil servants [and] government officials must live by the rules laid out for our beloved island of Jamaica," Douglas said.

"It is my belief that morality cannot be legislated, but decency and order can," he concluded.