Bolt will not strike ... but doping controversy may cost sprinter millions 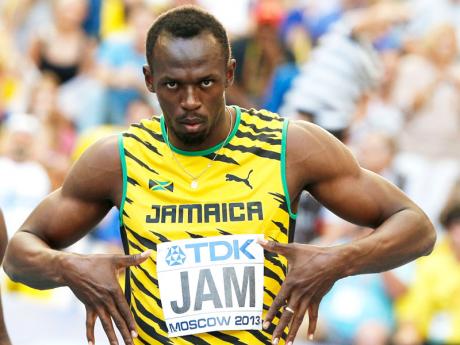 Usain Bolt is upset that the current tug o' war involving Jamaica and the World Anti-Doping Agency (WADA) may cost him millions of dollars in potential sponsorship after suggestions that he could be barred from competing at the Rio Olympics in 2016 - a claim that has been made during a high-profile questioning of the country's anti-doping efforts.

However, as far as walking the picket line with compatriot Shelly-Ann Fraser-Pryce and going on strike to force more action from Jamaican authorities is concerned, the legendary Jamaican sprinter warned: "Shelly, you're on your own with that. It's hard for me to strike because it's my job."

Fraser-Pryce threatened that she was prepared to not run if more support was not forthcoming from Jamaican authorities on WADA's position as well as other issues relating to infrastructure and the social well-being of athletes.

WADA has led a well-documented probe into the efficiency and integrity of Jamaica's drug-testing programme and had warned that athletes from the country - like Bolt - could be prevented from competing in Rio, if Jamaican authorities did not address their concerns.

The anti-doping agency has since visited the island and noted that there is compliance and that several recommendations have been made and agreed on.

Nevertheless, IAAF president Lamine Diack, in accusing WADA of leading a 'ridiculous campaign' against Jamaica and its athletics, rubbished the organisation's suggestion that Bolt and other Jamaicans could be banned from the Olympics and supported the integrity of the performances of Jamaica's top stars, who are among the most tested in the world by the IAAF.

"They (WADA) cannot ban anybody, stop this foolishness!" Diack blasted here just ahead of the IAAF's Gala during a press conference.

Still, this came after Bolt and his management had to be putting out fires during negotiations with a potential sponsor who was concerned that their would-be endorsee could be missing from the biggest stage on the planet.

That for Bolt is the real concern, and while he is not interested in committing to industrial action to prove a point, the iconic sprinter, who rakes in over US$20 million a year in endorsements alone according to Forbes, is certainly bothered by the threat to his mega million-dollar commercial juggernaut.

"It's really costing me money now, and I'm not too happy about that," Bolt said.

"Track and field is my job, that's the first thing. I know we've been going through a lot when it comes to drug-testing, WADA and the IAAF. There's been a lot going on," added Bolt, who was for the fifth time named the World Athlete of the Year on Saturday.

"This actually caused a lot of problems for me and my management. A sponsor came up to us and said 'we'd like to sponsor you'. They then used an agency that does background checks to figure out if it's viable (to sponsor) and it came back that WADA had said that I would not be eligible to run at the next Olympics. That information is not correct, so there are a lot of things that are going on with this drugs thing that I really feel they need to clarify because, for me, it's causing problems for me when it comes to making money from my sport," Bolt continued.

"For me, it's a big problem that they need to sort out immediately. It's not helping any athlete at all and it's really causing problems. We really need to get this out of the way and move past this, get the rules down, get everything straight ... because we need to move on. In every sport there are drug scandals and problems, but people get it down and move past it," underlined the six-time Olympic gold medallist.