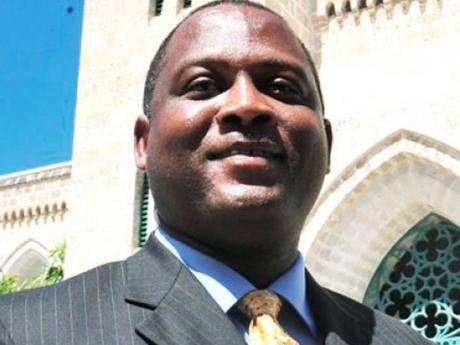 A BARBADOS government minister has launched a scathing attack on a Sunday Gleaner editorial, telling the newspaper to take its nose out of Bajan affairs and concentrate on the "rot going on in Jamaica".

The fiery reaction stemmed from the editorial, published this past Sunday, on the controversial arrest and charge of three employees of The Nation newspaper in Barbados for publishing a story and photograph of two 14-year-olds having sex at school.

Said Inniss, it is "one of the nastiest pieces of editorial work which I have seen in any media house in the Caribbean".

In relation to the arrest and charge of the journalists, the editorial stated: "We hope there are no political undertones to this matter, and that it does not imply an attempt to rein in The Nation's feisty independence."

The editorial added: "That would be sad and a reversal of that country's historic tolerance of, and government respect for, free and independent media."

However, in response to The Gleaner, Inniss said: "So I say to the editor of the Jamaica Gleaner, mind your own business and look at the rot going on in Jamaica. Barbados is in good hands.

"If we cannot protect our babies and grannies, then we are not worth our existence. That is my position."

He charged that the Jamaican newspaper "sought to give the impression that there was something political; some political mischief involved in the Royal Barbados Police Force bringing charges against senior staff at the Nation newspaper over a recent publication".

The Barbados government minister stated that the director of public prosecutions in his country was not under any political dictates from anyone.

He said Barbados has a "very independent judiciary" and "under the DLP [administration], members of the DLP have been prosecuted and persecuted".

He added: "I cry shame when I can see an editorial in one of the leading newspapers in the region [seeking] to give the impression, in defence of their colleagues here in Barbados, that there may be something political about it and the government of Barbados is seeking to stifle and muzzle freedom of speech in this country."

The trio were also ordered by Magistrate Wayne Clarke to surrender their passports and appear in the Criminal Court No.2 on March 11, 2014.

The charges stemmed from the October 26 publication of an article and accompanying photograph based on the Facebook posting of a video captured on cell phone of two students having sex in a classroom.