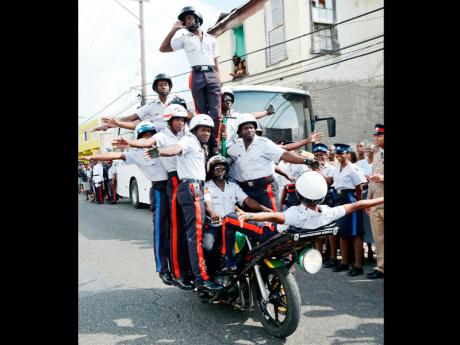 WITH CALLS for his resignation still fresh, Police Commissioner Owen Ellington got some welcome support from a member of the clergy.

"Don't sit in your comfort zone and try to tear down the commissioner," he said to loud applause. "We must all put our lives on the line if we are to bring back Jamaica," Henry said. While not pinpointing any particular group or individual, Henry suggested that all those who were quick to criticise the police, could take the place of the officers instead.

"Let them go and face the bullets," he said, getting more 'amens' from the gathering. Earlier this year, National Security Minister Peter Bunting had asked for divine intervention in the fight against crime. Henry reinforced this, saying any vision for Jamaica's future must be aligned with God.

"We envision a future where crime will be on the decline," he said. "But God has to enter into the life of this country to save our country." Henry called for new ways of policing and improving the force's investigative capacity. He said key to this was building strong relationships with communities, but this would only come with trust.

"Let the people come to trust you. Let them tell you their stories," he said, opining this would bring the information necessary for effective crime fighting. He encouraged the JCF members to live with the values of God's righteousness and not to rely on their own strength or firepower.

"When you're asleep, your firearm is of no use to you," he said, while asking the police to take their role seriously. "You are the first court. You are the first judge. And when you are going to judge, judge with discretion."

The Gleaner's editorial last week said the commissioner and the minister of national security should consider their future as the crime rate continues to climb.

Jamaicans for Justice last Friday called for the resignation of Ellington.

As part of the service, an Act of Memorial was led by Chief JCF Chaplain Bishop Dr Gary Welsh. The memorial honoured the 984 men who began the journey in 1867, the 845 men and women since 1904 who have given their lives on duty, and the 36 JCF members who were killed since the last memorial in 2012.