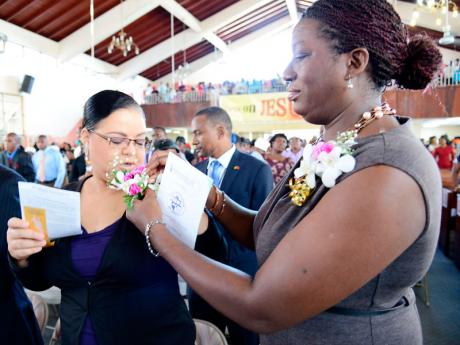 PRESIDENT OF the Press Association of Jamaica (PAJ), Jenni Campbell, has declared that journalists will continue to work hard to unearth vital information to keep the Jamaican public properly informed on issues of national importance, while holding true to the tenets of good journalism.

"Where there is no transparency, our journalists will press and press hard, but respectfully," Campbell told yesterday's service at the Pentecostal Tabernacle in central Kingston to mark the start of National Journalism Week.

"We stand for truth as you know it, and as we know it, because it is important for us to move forward," she added.

Earlier, Chief Justice Zaila McCalla saluted the media for the work they have been doing, but called for an even stronger partnership in the pursuit of justice.

"Be resolute and fearless," she insisted, "but also fair and accurate in processing information for the public."

Meanwhile, Pastor Devon Dawson, declaring the world has become a cesspool of immorality, pointed to some of the obstacles journalists are likely to face in their search for the truth.

The PAJ had previously rejected recommendations from the Office of the Prime Minister, describing them as too restrictive and not in keeping with true press freedom.

Central Kingston Member of Parliament and Education Minister Ronald Thwaites said there was a clear need to embrace values in the profession of journalism.

"Very often, the practice of journalism is not rooted in a sense of values," he said. "We need as Church, and we need as the journalistic profession to be far clearer."

Meanwhile, Olivia Grange, Opposition spokesperson on information, said while Jamaica has made significant strides in press freedom, becoming the first state in the Caribbean to abolish all forms of criminal libel, "recent events" show there are still challenges to the issue of press freedom.

National Journalism Week is being observed under the theme 'Persevering in the Face of Adversity', with a series of activities, and will culminate with the annual journalism awards presentation on Friday evening.