Gay 'positive' had no bearing on 'Batman' return 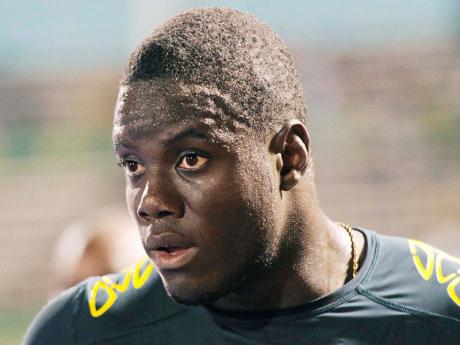 Ramone 'Batman' McKenzie says news of Tyson Gay's positive drug test in July this year had no bearing whatsoever on his decision to return to Jamaica to train with his high-school coach, Michael Clarke.

McKenzie, now 23, won many medals for Calabar High at the Boys' and Girls Championships in the middle of the last decade. Regionally, he won nine gold medals at the Carifta Games between 2006 and 2007, the year he became World Youth 200-metre champion in Ostrava.

Described as one of the most talented Jamaican high-school athletes, McKenzie was signed by adidas in 2009 and moved to Clermont, Florida to train with Lance Baumann. There, he rubbed shoulders Gay, the 2007 World Championship triple gold medallist and Trinidad and Tobago's female star, Kelli-Ann Baptiste, among others.

However, after four years of battling injury and weight issues, McKenzie has come home.

He began training here in September, two months after Gay - the second-fastest man of all time - failed an out-of-competition test for steroids in May and again at the US trials in June.

Gay was McKenzie's mentor during his time in Clermont, but he had decided to come home long before then.

"It wasn't anything from that. I know Tyson. He is actually one of the persons who groomed me from when I was 18 to where I am right now, and that was just misfortune because if people really knew what happened, they would understand," said McKenzie, who has grown into a giant of a man four years later.

"I knew it was basically a misunderstanding and he trusted the wrong people. It wasn't intentional and even if it was, people make mistakes and I would forgive him because he is a very good person. But that didn't affect my decision to move back."

He continued: "I had been thinking about it (moving back) for a while because every time I tried to do something here in Jamaica, it would always take a long time, so it required me to be here physically to do it and that was where the whole thought of me being back in Jamaica came from. It was nothing from the drug stuff. My decision was made way before that. I just waited out the season and in the summer, I made my final decision."

The real reasons behind his return, he said, had more to do with family and his entrepreneurial pursuits. McKenzie, who has been a 'businessman' from his days at Calabar High, launched his own brand of drinking water called 'Di Cave' on November 15, during his birthday party at a club in Half-Way-Tree.

It is the first of several business ventures that includes a new sports drink and 'customised' ice cream that he plans to undertake in the coming months. But he also missed his family.

"I wanted to be closer to my family. I believed that there was something missing while I was there. Even though I enjoyed the time I spent over there; my teammates were like family and they are still family to me, but for me to come home, is for me being home," he reasoned.

"When I was there, it was being at a second home and I didn't like the feeling after a time. And most of the stuff I wanted to do, I couldn't do it over there. I wasn't a citizen so I came back home with the sense that this is what I wanted to do and this was what I had to do to get it done."