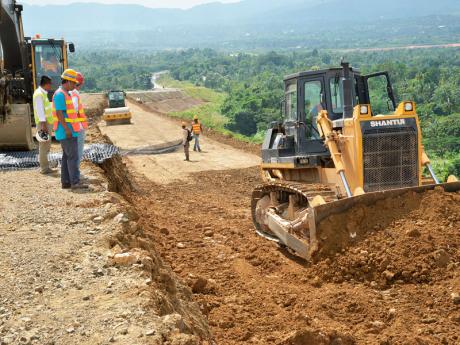 Work under way on a section of the North-South link of Highway 2000 in the vicinity of the Linstead bypass in St Catherine. The work is being undertaken by China Harbour Engineering Company. - Norman Grindley/Chief Photographer

Plagued by contractual issues and a two-year suspension, work on the North-South link of Highway 2000 has resumed with a completion date slated for 2016.

Ivan Anderson, managing director of the National Road Operating and Constructing Company, told The Gleaner yesterday that since this October, work has been ongoing on the first and third legs of the highway.

"Work on the first segment of the highway, which connects Caymanas to Linstead, started in October and work on the third segment, from Moneague to Ocho Rios, started in November," Anderson said.

However, this is over three months behind the previously scheduled dates for the start of the first and third segments of the roadway.

The first segment was scheduled to start in May, while the second section was to have begun in June with their expected completion dates in 2015.

But Anderson said the new completion date for these segments is 2016.

"The section in the middle, (Linstead to Moneague) started in January, so we are on target to meet the May 2014 deadline, and the other sections should be completed by January 2016," he said.

Noting that he could not say how much was being spent on each leg of the project, Anderson said it was still within the almost US$600-million budget.

He said the project was still being funded solely by China Harbour Engineering Company.

Th North-South link of Highway 2000 is expected to reduce travel time between Kingston and Ocho Rios, St Ann, to some 45 minutes.