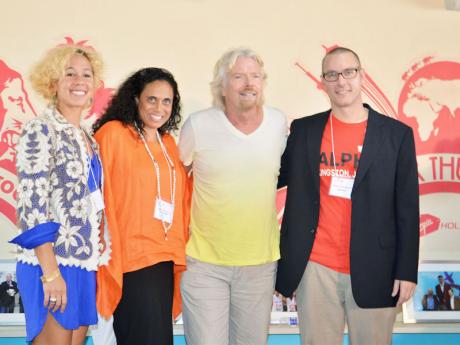 Alpha Boys' School received first place in the Pitch To Rich competition at the Branson Centre for Entrepreneurship - Caribbean (BCoEC) earlier this month. Alpha's clothing line, Alpha Wear JA, Touch By VLS and Vibes Cuisine were selected to pitch to Sir Richard Branson as part of Branson's visit to Jamaica and the business incubator he established in his name.

Alpha Wear JA and its fellow competitors have successfully completed the Branson Centre's entrepreneurship training programme and were selected to 'Pitch to Rich' based on demos submitted by video.

As winner of the competition, Alpha Wear JA will be featured on Virgin Unite's website. In addition, each of the three entrepreneurs who participated in the pitch competition will be the first to have access to a new loan programme through the BCoEC.

Joshua Chamberlain, who completed the BCoEC's programme just the week before, made the pitch on behalf of Alpha Wear JA to Virgin Group founder Branson, and his son, Sam, in front of an audience of about 100 people. These included BCoEC board members and staff, fellow BCoEC entrepreneurs, and members of the local media.

"The Branson Centre for Entrepreneurship is a critical resource for business development, personal development and, in Alpha's case, the sustainability of Alpha Boys' School," said Chamberlain. "Alpha has a history of entrepreneurship without really calling it as such. The Branson Centre has helped Alpha staff and students to tap into their existing entrepreneurial values and interests.

"The response from Richard Branson and his colleagues, as well as the business owners I've met and worked with through the Branson Centre, demonstrates not only how important the centre itself is, but has also provided reassurance that the school is on the right path," he added.

The vision of Alpha Wear JA is to create socially responsible opportunities for people worldwide to be connected with Jamaica's amazing culture, empower the most vulnerable in Jamaica, and inspire the world by their story.