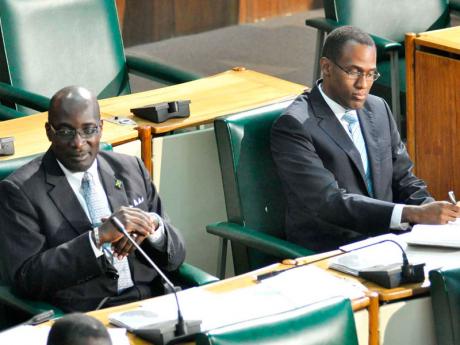 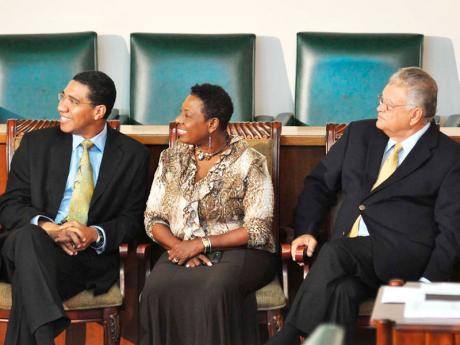 Opposition Leader Andrew Holness (left) was a guest of the Senate yesterday, along with Opposition members of parliament Olivia Grange and Karl Samuda, for the swearing in of new senators Clarke and Reid.
1
2

NEWLY MINTED Opposition Senator Dr Nigel Clarke used his maiden presentation in the legislature to urge the Government to move with alacrity in promulgating legislation that will make it easier to do business.

"It is this kind of streamlining and one-stop-shop approach that I know members of the business community would welcome," Clarke said.

He argued that with such an approach, one, with a single application, could get "a number of things done".

Said Clarke: "If it can be done in the voluntary sector, which is of vital importance, I see no reason why we can't improve the business climate in the country in a way that would boost production, boost output and improve the lives of Jamaicans."

Justice Minister Mark Golding, who piloted the charities bill, stated that the Government was taking the approach being suggested by Clarke, adding that the state would soon institute a superform to make it easier to do business.

Under the four-year Extended Fund Facility with the International Monetary Fund, Jamaica has committed to taking several steps to enhance the business environment.

Clarke, chief executive officer and chief operating officer of the Facey Group and the Musson Group as well as Ruel Reid, the principal of Jamaica College, yesterday took the oath of appointment as Opposition senators.

The charities bill, which has already been passed in the House of Representatives, is a single piece of legislation that provides for the regulation of charitable organisations. It eliminates the need for registered charities to apply for waivers under the Customs, General Consumption Tax, Income Tax, Property Tax, Stamp Duty and Transfer Tax acts.