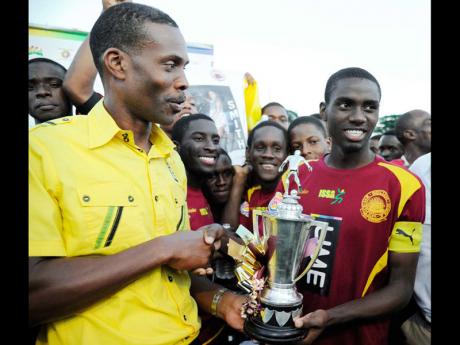 Managing director of LIME, Garfield Sinclair, presents the ISSA/LIME Walker Cup Knockout trophy to Wolmer's Boys captain Kimo Wallace at the Constant Spring Sports Complex yesterday. Wolmer's defeated Excelsior 4-2 on penalties to retain the title after both teams played to a 1-1 draw at the end of regulation and extra-time. - Ricardo Makyn/Staff Photographer

The Ludlow Bernard-coached Wolmer's were forced to play extra-time in a major schoolboy football final for the second time in less than a week after the game ended at 1-1 at full and extra time.

Kimario Osbourne netted the opening goal for Wolmer's in the 37th minute but Colorado Murray netted the equaliser for Excelsior in the 76th minute to send the match into extra time.

Wolmer's custodian Dane Lee was the hero for his team in the shoot-out when he saved two penalty kicks from Excelsior's Kurtis Christie and Samuel Halliman. Demar Rose, Jaheel Hyde, Chavez Brooks and Osbourne converted from the spot for Wolmer's.

It was a bitter-sweet day for the boys from Heroes Circle, who lost 3-2 in extra time to Jamaica College in the Manning Cup final last Saturday.

"The season has ended with us restoring some lost pride," said Bernard. "It was good to see the effort from the players this afternoon because they really gave their all.

"However, I was a bit worried when Excelsior started to dominate the latter parts of the game, but my players battled away and they were quite adamant that they were not going home empty-handed," he said.

On the other hand, Excelsior's coach Leebert Halliman was gracious in defeat.

"I think we did well because the boys gave it their best shot," said Halliman.

He added: "I think the lack of experience affected us in the penalty shoot-out because two players that we expected to score didn't score, but it just is one of those days.

Wolmer's dominated the early exchanges as they created a number of clear chances, but excellent goalkeeping from Excelsior's Jonah Morgan kept them at bay. Osbourne should have given Wolmer's the lead in the 25th minute, but his weak shot from 12 metres was saved by Morgan.

The speedy and skilful Osbourne then made up for his early miss when he evaded the Excelsior offside trap to lob the ball over the head of the advancing Morgan.

Excelsior, however, came out firing in the second stanza, as they had their opponents on the backfoot for most of the half. They were finally rewarded when Murray scored the equaliser with a beautiful 20-metre free kick past Lee. Christopher Thorpe came close to netting the winner for Excelsior five minutes later but his powerful shot from 15 metres was turned behind for a corner kick by Lee.