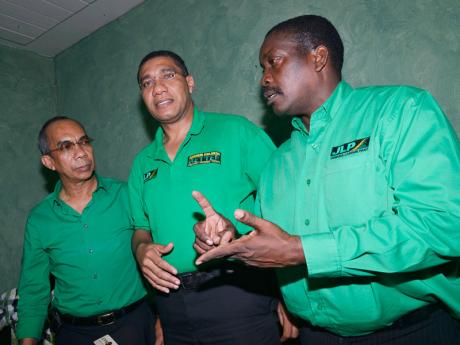 Jamaica Labour Party (JLP) leadership challenger Audley Shaw and his influential supporters - including former deputy leaders James Robertson and Dr Christopher Tufton, as well as Edmund Bartlett and Delroy Chuck - have been extended an olive branch as the party seeks to heal its wounds.

During yesterday's 'extraordinary' meeting of the party's Central Executive, party leader Andrew Holness provided a welcoming embrace while members of Shaw's camp appeared to be in good spirits.

The expressions of Tufton and Bartlett mirrored the friendly attitude of party supporters milling about the premises of the JLP's Belmont Road, New Kingston headquarters.

Under the constitution of the JLP, the first meeting of the Central Executive after the annual conference traditionally focuses on the election of chairman, general secretary, treasurer and their deputies, but this time around, the meeting went far beyond its customary mandate in an obvious attempt at healing.

It was in this apparent bid to bury the hatchet after three punishing weeks of haggling that followed two months of acrimonious campaigning ahead of the November 10 leadership election, that JLP Leader Andrew Holness announced Shaw has been co-opted to the powerful decision-making Standing Committee of the party.

Holness also revealed that Tufton, the former deputy leader for Area Council Four, who opted out of a bid to retain his post on the eve of the meeting, had also been given a place in the Standing Committee.

Robertson's nomination was also accepted by the Central Executive, enabling him to retain his position as deputy leader in charge of Area Council Two. He was seated among the leadership at last evening's press conference.

The nominations of both Tufton and Robertson had been under a cloud as there were claims by JLP General Secretary Dr Horace Chang that they were not properly nominated.

During the press conference, Holness expressed hope that both Shaw and Bartlett would in the not-too-distant future reconsider their decisions not to accept positions on the Shadow Cabinet.

Until then, he reiterated, he would monitor the finance portfolio while Dr Ken Baugh would oversee foreign affairs.

In an unprecedented move, Holness disclosed that although Shaw did not accept the position of opposition spokesman on finance, in which he served for 15 of the last 20 years, he would remain chairman of the all-important Public Accounts Committee of Parliament.

Bartlett, Holness said, has been asked by the Central Executive to chair the internal relations committee of the party.

"The process by which it was done was unanimous that Mr Shaw, Tufton, Bartlett, and Mr (Delroy) Chuck, and Shahine Robertson ought to be co-opted to the Standing Committee," he said.

The Standing Committee meets weekly and is responsible for the regular decisions of the party.

In the meantime, the incumbents were returned to key areas in the elections constitutionally due at the first meeting of the Central Executive after the JLP annual conference.

In another clear show that an attempt was being made to heal the rift within the JLP, 10 persons were selected to the Central Executive from the active membership of the party - five from the Holness camp and five from Shaw's.

Joseph Issa, Alston Douglas, Russell Haddeed, Delano Seiveright and Ian Murray, deemed to be supporters of Shaw, have joined the Central Executive with Mark Azan, Harold Brady, Tyrone Robinson, Pauline Reynolds, and John Myers, who are said to be backers of Holness.