Jamaicans know they should, but don't save 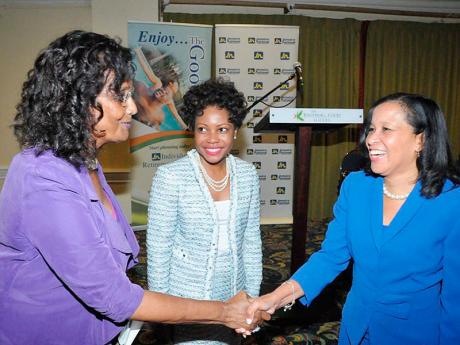 Dorothy Pine-McClarty (left), chairman of the board of trustees of the JN Individual Retirement Scheme, greets Nicolette Jenez, senior director of pensions at the Financial Services Commission. At centre is Dr Dana Morris-Dixon, executive, business development and research at the Jamaica National Building Society. - Contributed

Dr Dana Morris-Dixon, executive with responsibility for business development and research at Jamaica National Building Society (JNBS), has suggested there is a gap between financial literacy in Jamaica and the country's savings rate.

Her comment came only days after JNBS General Manager Earl Jarrett said the country's savings rate was among the lowest in the world.

Addressing contributors to the JN Individual Retirement Scheme at a meeting in Kingston last week, Morris-Dixon noted that although the country had a poor savings rate, data showed that the Jamaican population was generally financially literate, enjoying a better rate of financial literacy than many other countries.

"That begs the clear question: Why, then, are our savings and pension funds so low in Jamaica?" she argued, highlighting data from a survey done by the Financial Services Commission (FSC).

The FSC's national baseline survey conducted in 2012 found that 63 per cent of Jamaicans demonstrated a positive attitude toward saving for the future. The survey was done using a random sample across all 14 parishes.

"Although many Jamaicans have a positive attitude toward saving, there are still many people who do not have access to, or deliberately choose not to place their savings in a financial institution for many different reasons," Morris-Dixon said.

She noted that among the issues was the low return on savings that most people perceive they will get on their deposit. In addition, she said many people forego opening savings accounts to avoid tax and bank fees; and, to ensure that they have immediate access to their funds, as well as to avoid the perceived tediousness of opening an account.

However, she maintained that many people are also apprehensive about banking because of their genuine fear of navigating financial institutions.

"It means they will need to fill out forms, and so on, which some persons don't understand. Naturally, we must admit that our country still has a problem with literacy; and there are many people who are functionally illiterate, although some have been schooled up to the secondary level," said Morris-Dixon.

Jamaica's literacy rate is about 86.5 per cent, according to the Planning Institute of Jamaica.

Morris-Dixon has argued that the gap between the country's low savings rate and its positive financially literacy rate may be due to people's lack of understanding about how regulated financial institutions can help them to achieve wealth. She pointed, for example, at pension planning, reasoning that the lack of knowledge about investing in a pension plan is troubling, especially among self-employed persons and seasonal employees.

"If more people cannot meet their needs at retirement, it means our country will be poorer for it. There will be additional burden on our social safety net programmes, which we know are not very strong; as well as on our health infrastructure and other social services," Morris-Dixon said.

Morris-Dixon added that although the population of people 60 years and older was growing rapidly and is positioned to overtake the child population by 2050, the National Insurance Scheme will be the only source of income for 40 per cent of Jamaicans when they retire.

The average fortnightly benefit from the scheme is $5,600.