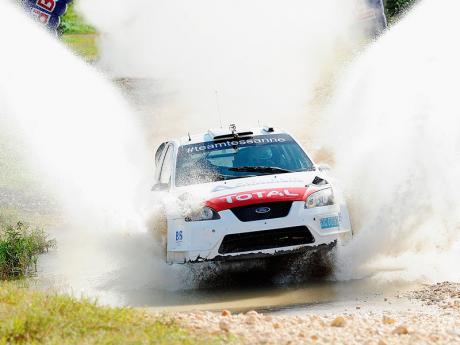 The duo, which competed in a 2006 Ford Focus World Rally Car (WRC), clocked a combined time of one hour 26 minutes and 19.495 seconds over the two days, which consisted of 18 stages. Their time was one minute and 36.834 seconds faster than their closest challenger, John Powell, and co-driver, Nicholas Telfer, in their 2012 Ford Fiesta WRC.

Panton, who increased his record for the most Jamaica Rally victories to eight, was winning his second major rally of the year, having won Rally Trinidad and placed second in Rally Barbados.

"It is never rewarding unless you have a lot of competition, a lot of other competitors, and a lot of people in the class to help build it, so the ones in the past with more competitors in the class were more rewarding," Panton confessed to The Gleaner. "But I am very pleased to successfully defend and keep the trophy here."

The Jamaica-born Powell, who resides in and represents Trinidad and Tobago, and Telfer finished with a combined time of one hour 27 minutes and 56.329 seconds over the two days.

"Jeffrey (Panton) drove very well. To me, he is the best driver in the English-speaking Caribbean," a gracious Powell shared. "For next year, we will have to have a lot more practice before coming into this event and try and carry the competition a lot more to him (Panton)."

The fourth- and fifth-place finishers were competing as part of the final leg of the North American and Central American Motoring series.

Five-time champion, Gary Gregg, did not face the starter yesterday, as his Mitsubishi Lancer Evolution 9, which caught fire during Saturday's opening day in Lydford, St Ann, could not be repaired in time.

Yesterday's closing day of the rally also saw another Jamaican duo of Joel Jackson and Dmitri Dawkins retiring their Impreza due to a fire suspected to have been triggered by an engine problem. The pair was fifth after the first day.

The incident, which occurred immediately after the 'service halt', resulted in a delay which forced the cancellation of stages 17 and 18. This reduced the stages for the day from 11 to nine.

That was the second delay of the day. An earlier stoppage was triggered by the collapse of a spectator, after having what Dr Derrick McDowell suspected to have been a stroke. The man was taken to the Linstead Hospital.

Only 15 competitors completed the nine stages of winding dirt road after Matthew Gore and Raymond Farquharson also pulled out with their Toyota Starlet after ending the opening day in 16th position, while the duo of Barbadian James Betts and Trinidadian Robert Cadiz were forced to call it quits after their Mitsubishi Lancer Evolution 5 failed to restart after it came to a halt.