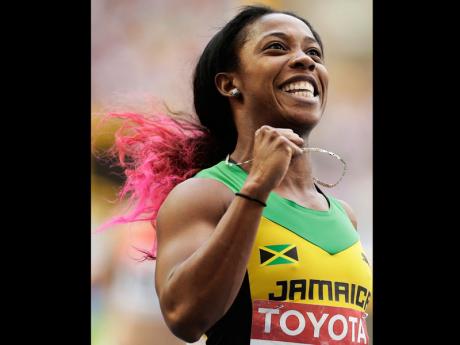 Top female sprinter Shelly-Ann Fraser-Pryce is hoping to compete in the 60m at next year's IAAF World Indoor Championships in Sopot, Poland, and is ready to chalk out more 200 metres.

However, with the absence of the marquee Olympic Games and outdoor World Championships from the 2014 calendar, Fraser-Pryce is looking to continue to test herself on the indoor circuit in the 60m - after her debut earlier this year - as well as continuing to improve in the 200m.

"I definitely see myself running more 60m next season," said Fraser-Pryce, who capped a splendid 2013 season with Diamond League wins in the 100m and 200m. "I enjoy it, I did three last season and it was very good."

The Jamaican made her first two 60m appearances at the Aviva Indoor Grand Prix in Birmingham on February 16; competing again in the event five days later at the Stockholm XL Galan, where she posted her current personal best 7.04. That time already makes her the third-fastest Jamaican in the event behind Merlene Ottey (6.96) and Veronica Campbell-Brown (7.00).

"It's an experience that I would love to have again. Next year is the World Indoors and I have never been to one of those so that's on the agenda as well," Fraser-Pryce added.

The MVP Track Club star, who ran a personal best 22.09 at last year's Olympic Games in what was an experimental year for her in the 200m, ran an additional four half-lap races this year, peaking at 22.13.

EXPECTING TO DO MORE

Encouraged by her World Championships gold medal in the event and desperate to take her time below the 22 seconds barrier, Fraser-Pryce also noted that she is expecting to do a lot more 200m next year than her 100m pet event.

"Next year, we are working to do a lot more 200m than 100m, and that is to say that I want to make a mark and stamp my class in the 200m," she added, noting that she is also expecting the 200m to further improve her execution of the 100m.

"Last year, I said I needed to do more 200m, it makes my 100m better, way better than it was and for me, next year is just working more for the 200m; doing more strength and endurance work to get beyond that 22-second mark," Fraser-Pryce said.