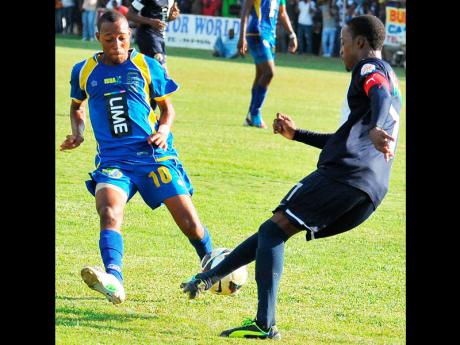 Rafique Bryan netted a first half brace and Ramone Howell scored a header on the stroke of full time, to give the boys from Old Hope Road a sizeable lead heading into Saturday's return leg at Stadium East playing field, much the enjoyment of their coach Miguel Coley.

"We executed well today; we kept putting the ball at the back post, so I think the team executed the plan extremely well," said Coley.

"We are feeling very confident at this stage, but no champagne yet. We still have a job to do, and while the guys have worked hard, we cannot start celebrating yet. We have one more leg to go, which is very important, so we need to go there and get the job done," added Coley.

It was the first loss of a long season for the STETHS team, which did not look as menacing as in previous outings.

So even as early as the 10th minute when Bryan opened the scoring, it was hard to see a way back for the daCosta Cup champions.

As in previous matches, the St Elizabeth team tends to have the better of play in the second half, but that workload increased twofold when Bryan finished off a sweet move that included 10 passes - with a goal. His second of the afternoon was tallied at the 45th minute.

At half-time, STETHS coach Omar Wedderburn must have had some strong words with his players, who looked listless in the first. On the resumption, they responded well. First, Khesanio Hall showed flashes of his brilliant best to free himself for a shot on goal, but that effort sailed over the crossbar.

Next, Romain Thompson's toe-poke at the near post was watched by Courtney Donaldson in the JC goal as it crashed into the side netting, as STETHS.

As STETHS - playing on familiar turf - went goal hunting, they left their backline exposed to the quick-footed JC attackers.

Then just when it seemed a 2-0 win was all they would have to take back to Kingston, JC broke down the left flank and STETHS goalkeeper Enrique Rochester stormed off his line to cut the angle. However, the attacking player kept possession and lifted a pass inside the six-yard box for Howell to simply nod into the open goal, for the comprehensive 3-0 margin.

"We have some work to do," Wedderburn said. "We have enough confidence to go to Kingston and turn this around.

"I don't believe that the players were fatigued. If anything, I think they were a little nervous, but we played better in the second half and we will try to recover on Saturday," he added.