Reggae wine from Indiana to be launched in Jamaica 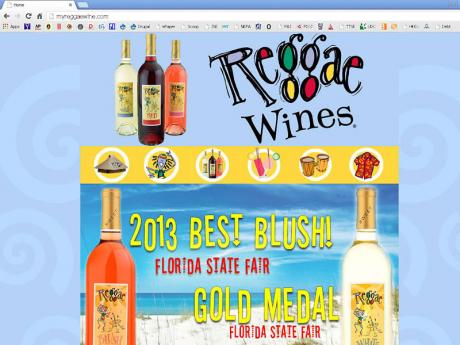 A wine inspired by Jamaican music will be launched into the crowded local wine market in January by American Carlos Daley.

The wine breaks from tradition by recommended pairing with flavoured rums.

Daley, the CEO of Asymmetrical Investments and Financial Planning Company Limited, is the promoter of the International Reggae Wine Festival in Jamaica and three other festivals in his home state of Maryland in the United States.

He introduced the wine at his annual wine festival in Maryland - and reportedly sold out all 55 cases.

Reggae wines were first created in 2005 and are a product of the Easley Winery in Indianapolis, Indiana - one of the older family-owned wineries in that state. The company, which is run by second-generation owners, Mark and Meredith Easley, produces more than 20 different wines.

The wines are described as being sweet and fruity and perfect for the beach. In a break from wine drinking tradition, the company recommends mixing its wines with melon, coconut or pineapple flavoured rums "for a taste too delicious to ignore".

The couple came up with the concept behind Reggae wines while enjoying the beach in the Florida Keys and listening to the "smooth beats of reggae music", according to a flyer for the wine.

Although from Indiana, the wine associates itself closely with Jamaica. The label features a cartoon portrait of 'Reggae Bob' - a dancing Rastafarian in red, green and gold, playing a drum and drinking wine. The wine's website builds on the brand with an online store offering clothing and other items featuring Reggae Bob.

The traditional tasting notes recommend song pairings for each of the three wines. Preferred listening is quite old school and includes Jammin by Bob Marley and The Wailers for the wine called Reggae Blush; Electric Avenue by Eddie Grant for the Reggae White; and Red Red Wine by UB40 for the Reggae Red.

The Reggae wines are one of the Indiana winery's more recent products, and have won several awards recently.

Daley does not yet have a distributor for the wine in Jamaica, but hopes to target one during the launch in January at the Liguanea Club in Kingston.

"You have a burgeoning wine market here," said Daley. There were more than 28,000 regular wine drinkers in Jamaica three years ago, he said, while estimating that there are now more than 50,000.

Daley said he will be showcasing Reggae wine along with a wine from California's Napa Valley at his International Reggae Wine Festival scheduled for Montego Bay in October 2014.