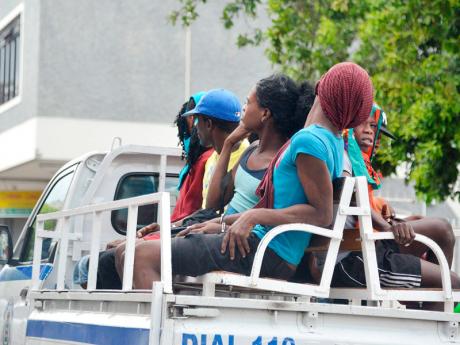 The police take into custody a number of young men believed to be homosexuals who are allegedly responsible for a series of robberies in New Kingston. -Norman Grindley/Chief Photographer

There are growing fears that the rowdy and sometimes criminal behaviour of a group of homosexual men in New Kingston could erode the strides that have been made towards greater tolerance of homosexuals in Jamaica.

Nonetheless, Dane Lewis, executive director of the Jamaica Forum for Lesbians, All-Sexuals and Gays says the rambunctious gathering - which in the past has been fingered in robberies, theft and other antisocial behaviour - highlights the issue of persons being evicted from their communities because of their sexual orientation.

"It is unfortunate. Some of what they have done may be eroding some of the trending towards greater tolerance, but I think it continues to highlight the reality that our young people are being kicked out of their homes," Lewis said at a Gleaner Editors' Forum last week.

While condemning the acts of violence reportedly carried out by the mainly cross-dressing men, Lewis argued that sometimes the group is blamed for acts carried out by heterosexuals.

He said he found no issue with how some in the homosexual group express themselves through dress which, on many occasions, involve wearing make-up, female clothing and heels.

"They have a right to their gender expression and identity, and to express themselves as long as they don't infringe on anyone else," argued Lewis.

"The gentlemen who wish to 'bleach', wear women's attire shouldn't offend anyone; they are expressing themselves. My only concern is the risk of violence that they expose themselves to. But everyone should be free to express themselves."

In the meantime, Susan Goffe, chairperson of the human-rights group Jamaicans for Justice, questioned claims that the New Kingston-based men are flaunting their sexuality publicly, which is offensive to many Jamaicans.

"People in their minds seem to feel that someone who is homosexual should do everything in their power to hide their sexual orientation," said Goffe.

"For example, somebody would look and say, 'I don't see him with a girlfriend'. What is he suppose to do? Should he have a pretend girlfriend, as people do, in order to hide?

"And in terms of how you walk, how you speak, your gestures … . Are you supposed to hide all of that?" she asked, agreeing with Lewis that these men should be free to go about their business safely.

Lewis agreed, while claiming that many of the gay men who are in New Kingston were either threatened or violently displaced from their communities.