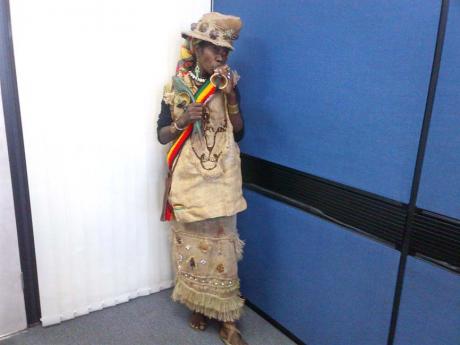 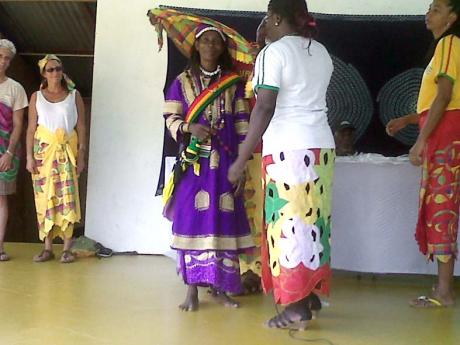 Gloria 'Mama G' Simms of the Trelawny Town Maroons in St James is given a traditional Surinamese Maroon wrap on Sunday, June 23, at the 5th Annual Charles Town Maroon Conference in Portland.-PHOTOS BY PAUL WILLIAMS
1
2

FLAGSTAFF, St James:ALWAYS IN her distinct African-inspired attire, Gloria 'Mama G' Simms can easily be spotted in a crowd.

Her confidence and pride as a Maroon woman, walking in the footsteps of Nanny, as she put, are without doubt. And her diminutive frame belies the grandeur of his spirit and the strength of her personality.

Simms, who is a descendant of the Trelawny Town Maroons in upper St James, has been working long and hard to revive and sustain Maroon culture and awareness. A fixture at indigenous cultural events all over the country, Simms is also becoming a regular presenter at the annual Charles Town Maroon Conference in Portland.

She is the chair of the Maroon Indigenous Women's Circle (MIWC), "a consultative assembly with responsibility for the welfare for culture, using it to nurture families and communities throughout Jamaica".

Formed in 2007, its mission is "to preserve traditional knowledge and historical sites, dates, and events that tell stories of our African ancestors' journey, through consultation, life coaching, lifelong training, therapy, and cultural-exchange programmes".

Later this month, Simms will be travelling to Suriname on one of these culture exchanges. She was invited by Suriname's Marron Vrouwen Netwerk (Maroon Women's Network), which said by way of a letter, "Our common commitment to connect and unify the Maroons in the Americas for sustainable human development in our home countries will contribute to assist and join forces to mobilise resources in our fight against poverty in Maroon communities as eco-tourism destination is eminent to our network."

This visit coincides with the annual Marron Vrouwen Netwerk (MVN) old year-new year activities from December 30 to January 11 next year. During that time, Simms will be introduced to the Maroon chieftaincy of several Maroon tribes "to exchange views on common issues".

On January 11, there will be a workshop with the NVM board members and the chiefs of Suriname's six Maroon tribes "to discuss strategies for sustainable community-based development programmes/projects". The visit will culminate with the signing of a memorandum of cooperation between MVN and MIWC.

From this visit, Simms said she is "expecting a lot". She intends to set up trading posts between Jamaica and Suriname and participate in artistic and cultural endeavours. She said she would love to take some other members of the group, but financial constraints would not allow that. She would love to get sponsorship for the trip as she said, "I am hoping to go and represent the sisters as if they were there".

On December 16, Simms will also be participating in the shooting of a documentary on Jamaican music by an Irish television station. She will be speaking on traditional music from a Maroon perspective. The shooting takes place in Flagstaff, St James, the site of one of Jamaica's most important Maroon settlements, where Cudjoe lived.