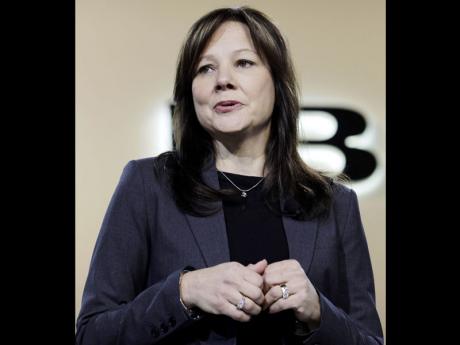 Kettering University President Robert McMahan was travelling in China a few months ago when he bumped into one of the university's board members at an airport in Shanghai.

Mary Barra, the busy global product development chief at General Motors Co, might have just said hello and turned back to her phone. Instead, she had a long-discussion with McMahan's teenage son about his education and his efforts to learn Mandarin.

"I turned to my son after she left and said, 'I put a month's pay on the fact that you just met the next president and CEO of GM'," McMahan said. "Even he, as a 16-year-old, was impressed by her approachability."

McMahan can keep his pay. Last Tuesday, GM's board named Barra, a 33-year company veteran, as its next CEO, making her the first woman to lead a major car company.

When Barra starts her new job on January 15, she will lead a company that's made nearly $20 billion since emerging from bankruptcy in 2010, much of it from the cars and trucks she helped develop. But she still faces challenges of paring down GM's costs and winning over buyers in international markets such as India and South America.

Akerson, 65, said he had planned to stay at least until spring, but his wife's diagnosis changed that. He said the board unanimously picked Barra from several internal candidates because of the breadth of her experience, her management record, her people skills and her understanding of GM's operations.

"This is an executive who has a vision of where she wants to take the organisation," he said.

Since February 2011, Barra has held what many say is the most important job at GM. She joined the company in 1980 as an engineering student at Kettering - then known as General Motors Institute - and became a plant manager, executive director of engineering and head of human resources.

Along the way, she earned a reputation as a manager who made tough decisions, yet was able to get people to follow her lead and work as a team, according to current and former GM executives. Noting her talent, GM sent her to Stanford University to get an MBA.

The 51-year-old executive has been in charge of design, engineering and quality for all GM vehicles and has shepherded most of the company's recent new-vehicle introductions. Under her command, GM rolled out brawny new full-size pickup trucks, the Chevrolet Silverado and GMC Sierra, and the Chevrolet Impala full-size car, which earned the highest score for a sedan in testing by Consumer Reports magazine.

During her tenure, GM's quality scores rose in surveys done by J.D. Power and Associates. She also streamlined the organisation, eliminating positions and putting one engineer in charge of each vehicle.

"I don't see any reason why she won't be a huge success," said Ed Whitacre, a former CEO and chairman who promoted Barra to head human resources.

Akerson hinted at Barra's promotion earlier this year when he told a women's business group in Detroit that a 'car gal' would someday run one of the Detroit Three automakers. But he made it clear on Tuesday that she wasn't picked because she's a woman.

"Mary's one of the most gifted executives I've met in my career," he said.

Among Barra's biggest tasks is executing plans designed to cut costs and putting out better products, Akerson said. One big step in getting there: making more vehicles off the same underpinnings, or platforms, that can be sold in multiple markets, like the Chevrolet Cruze compact car.

In 2009, GM had 30 different vehicle platforms, adding to manufacturing complexity and cost. Under Barra's leadership, it's moving to build nearly 90 per cent of its cars and trucks off five or fewer platforms by the end of this decade, Akerson said.

In an October interview with The Associated Press, she said GM is also moving to build vehicles with more common parts to trim costs where customers won't notice.

As product development chief, Akerson challenged Barra to bring vehicles to market faster. She responded with swift introductions of the Cadillac ATS, a BMW 3-Series competitor, and the Impala. When the midsize Chevy Malibu didn't sell well, Barra's team gave it new looks, more interior space and a new engine with better gas mileage - all in less than a year.

"She is polished, soft-spoken, invariably polite, but firm and goal-focused. She will have a learning curve, but will be an excellent CEO," said Bob Lutz, a retired GM vice-chairman who once led product development.

Barra grew up near Pontiac, Michican, in a car-oriented family. Her father was a die maker who retired from GM after 39 years. GM's previous two CEOs, Akerson and Whitacre, came from outside the auto industry and lacked the experience that Barra has, said Erik Gordon, a professor at the University of Michigan's Ross School of Business.

"There's nobody with more years of honest 'car-guy' credentials than she has," Gordon said. "She's the one to do the breakthrough."