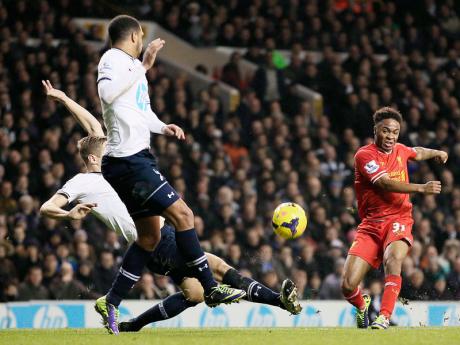 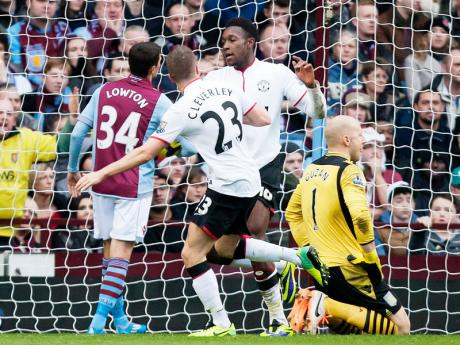 Liverpool delivered a potent attacking master class yesterday, with Luis Suarez at his devastating best in a 5-0 rout of Tottenham that signals the team can sustain an English Premier League title challenge.

The 18-time champions, who haven't won the title since 1990, moved two points behind Arsenal after the leaders were stunned 6-3 at Manchester City on Saturday.

After Danny Welbeck's double for United, Suarez netted twice for Liverpool and played a part in the other three goals at White Hart Lane.

After another demoralising collapse, Tottenham, which see themselves as a Champions League team, are five points from fourth place, but above United.

It is Liverpool exceeding expectations this season, sitting in second place.

The gulf between Liverpool and Tottenham, although only six points, seemed far wider on the basis of yesterday's lopsided encounter.

The contrast between the strike forces in the league is glaring.

Suarez has 17 goals in a season that only began in late September as he completed a 10-game biting ban.

Tottenham have scored only 15 times in 16 league games and couldn't even muster a shot on target against the visitors, who were without the injured striker Daniel Sturridge and captain Steven Gerrard.

Instead, Suarez captained Liver-pool for the first time, an unthinkable proposition when he was banned for racist abuse, then biting before agitating for a transfer in the summer window.

Suarez took just 18 minutes to open the scoring. Defender Michael Dawson blocked a through ball from Suarez, but Jordan Henderson recovered possession and fed the Uruguay striker to nip in and score.

Henderson volleyed in the second five minutes before half-time, seizing the ball after Suarez was denied by goalkeeper Hugo Lloris.

Any hopes of a Tottenham comeback were thwarted by Paulinho being sent off in the 63rd for sinking his boot into Suarez's ribs.

With a man advantage, Liverpool were even more dangerous up front.

SUAREZ SWIFT AND SURE

Suarez then crossed for Flanagan to score Liverpool's third in the 75th, found the net again himself in the 84th by chipping Lloris and fed the ball for Sterling to complete the rout five minutes later.

"I loved our arrogance today," Liverpool manager Brendan Rodgers said. "The arrogance with the ball was very good - lots of angles, lots of people moving and interchanging positions.

"We looked a real threat while retaining that solidity in defensive shapes."

At Villa Park, Welbeck seized on Robin van Persie's injury absence to score his first goal since the opening day of the season in August.

Welbeck buried the rebound in the 15th minute after Adnan Januzaj headed against a post, and netted again three minutes later from Antonio Valencia's cross.

"It is really important for Danny," United manager David Moyes said. "He is a forward and he needs to get himself goals. He got two poacher types today and he could have had had another.

"With Robin out, he stepped up to the mark. When you get opportunities, you show what you can do. Danny certainly did that."

Another goal drought ended, with Tom Cleverley scoring his first goal in a year from Wayne Rooney's lay-off in the 52nd.

In the day's other game, Norwich and Swansea drew 1-1.

Nathan Dyer capitalised on some poor defending from Norwich captain Sebastien Bassong to put the Welsh side ahead in the 12th minute.

But Dyer was stretchered off before half-time with an ankle injury sustained in a challenge with Bassong.

In first-half stoppage time, Gary Hooper levelled for Norwich, lashing home from 25 yards after collecting a knockdown on his chest.

Peter Whittingham's goal moved Cardiff four points clear of the bottom three in what proved to be Steve Clarke's last match in charge of West Brom. Neither team shone, but Cardiff had the better of a poor first half with defender Steven Caulker going close. Gary Medel came to Cardiff's rescue after the break, clearing Gareth McAuley's goalbound shot off the line. Whittingham headed home the winner to condemn the Baggies to a fourth defeat in a row and on Saturday night head coach Clarke was sacked.

Petr Cech made a string of second-half saves as Chelsea hung on to edge past a rejuvenated Crystal Palace and move within two points of leaders Arsenal. Fernando Torres tapped in to put the Blues ahead at Stamford Bridge after Willian's shot rebounded off a post. Palace equalised via Marouane Chamakh's volley from a Joel Ward cross, before Ramires curled Chelsea back in front.

Everton moved back into the Premier League's top four with a resilient victory over Fulham. With the hosts in control during the first half, Leon Osman curled in. But Fulham improved and drew level via Dimitar Berbatov's penalty after Gareth Barry fouled Alex Kacaniklic. Everton then had to dig deep and Seamus Coleman tucked in Steven Pienaar's cross before Barry redeemed himself with a header and Kevin Mirallas grabbed an injury-time fourth.

Goalkeeper Asmir Begovic helped earn Stoke City a point as the Potters held Hull City to a drab goalless draw. Begovic, who passed a late fitness test on a thigh injury, produced fingertip first-half saves from Ahmed Elmohamady and Yannick Sagbo, before brilliantly keeping out a

header from the former. Stephen Ireland had a goal ruled out for Stoke after Peter Crouch's initial header was saved by Allan McGregor.

Manchester City delivered an ominous message to their Barclays Premier Leaguetitle rivals as leaders Arsenal were thrashed, closing the gap on the Gunners to just three points. Sergio Aguero's early goal was cancelled out by Theo Walcott, but Alvaro Negredo put City back in front before half-time. Fernandinho extended their lead before Walcott's second restored some optimism for Arsene Wenger's side. But David Silva and Fernandinho added further goals before Per Mertesacker's header made it 5-3 in added time. The rout was completed by Yaya Toure's penalty.

Jay Rodriguez put the finishing touch to a wonderful move as Southampton held Newcastle at St James' Park. The Magpies took the lead in the first half when Yoan Gouffran took the ball around keeper Paulo Gazzaniga after a poor error by defender Jos Hooiveld. Southampton equalised through Rodriguez, who slotted in after a great one-two with Steven Davis. Loic Remy then wasted a golden chance to score Newcastle's second, striking well wide after Gazzaniga's mistake.

Sunderland earned only their third away league point of the season following an uninspiring draw against fellow strugglers West Ham at Upton Park. Jozy Altidore was through on the Hammers' goal early on, but had his shot saved by keeper Jussi Jaaskelainen. A 25-yard shot from Black Cats defender Phil Bardsley came off the crossbar before Jaaskelainen fended away a long-range Lee Cattermole effort.