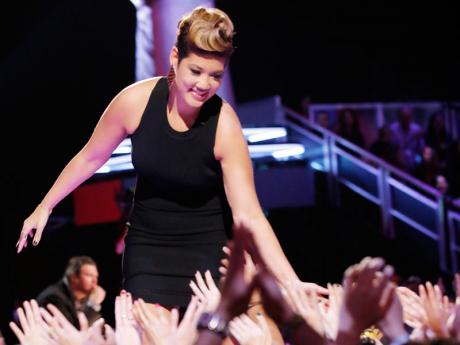 "I know that in my mind and in my heart, you are the winner of this show," declared coach Adam Levine following three phenomenal performances by Tessanne Chin last night on NBC's 'The Voice'.

With the title at stake, and after months of intense preparation and strong performances, Chin once again solidified herself as the top contender to be called 'The Voice'.

Each contestant performed three songs, including a duet with their coach, a new solo, and the song that took each through the blind audition. All three put their best foot forward, but it was Chin who appeared to have stood out the most.

"Of course, I can't sing like Whitney Houston, but I consider this as a tribute to her," Chin said before hitting the stage.

And Levine, her coach, was once again blown away by Chin's extraordinary talent.

"I have no thoughts right now, just emotions. I keep being thrown off kilter by how you do this. That song was almost impossible to replicate, and each time we have to ask, 'Where is the ceiling for Tessanne?' You continuously blow me away," he stated.

Her duet with Levine was equally good. The seductive performance created a social-media firestorm. Both clad in black and white, the duo delivered an emotional rendition of The Beatles' Let It Be, for a moment bringing a reggae vibe to the song, much to the delight of fans.

"Tessanne, you and Adam won 'The Voice' with that beautiful duet. Hands down! You're such a beautiful spirit. I loved it, you got my vote," one fan declared in a tweet.

"Adam and Tessanne's duet was the best of all three. Tessanne is the most talented," declared another.

Earlier in the night, Chin once again performed her blind audition song, Pink's Try. Her performance may even have been even better this time around.

"Everything you do just draws me in. Your ability is extraordinary and I revel in it all the time," said Levine after that first performance of the night. "I think the talent you have is exceedingly rare. You are one of the most genuine and loving people I have ever met."

International diamond-selling artiste Shaggy, who encouraged Chin to audition for the competition, told The Gleaner the performances were well planned by Levine.

"Sentiments are high where Whitney is concerned, and on top of that, it is sacred waters to touch a Whitney song," Shaggy told The Gleaner last night. "I think it was a strategic move by Adam to let people know that she can do that and that it is OK to do that. In saying that, I don't think this will sway people's minds. I think everybody's mind is pretty made up. They have seen what Tessanne can do, especially with that epic performance of Bridge Over Troubled Water."

Damion Crawford, junior minister in the Ministry of Tourism and Entertainment, said Chin has reggae and Jamaica trending.

"The performances were awesome and she stayed true to her roots with the duet, adding a little reggae," he said.

Asked how Jamaica should celebrate Chin, whether she wins or loses on tonight's results show, he added: "Jamaica has already celebrated Tessanne with the support they have consistently given. I am proud of the way Jamaicans have come together once we are competing with the world."