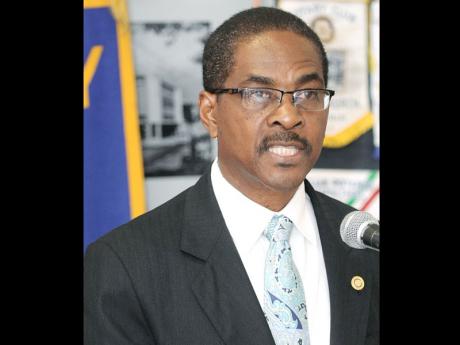 JUSTICE SEYMOUR Panton, president of Jamaica's Court of Appeal, is accusing the media of glorifying criminality and at the same time, publishing inaccurate stories.

"We have a situation where media houses are encouraging criminality … they promote individuals who may be suspect in criminal activity at a level that is unbecoming," Panton said, while delivering the keynote address at the Rotary Club of Montego Bay East's weekly meeting at the Sunset Beach Resort in Montego Bay last week Thursday.

In his wide-ranging address, Panton said media houses need to examine whether they are contributing to crime based on the nature of the reports they carry.

"Media houses need to examine themselves and see if they are not part of the problem. There are media houses that have it advertised to people in the communities all around the country that when you know news is going to happen, to tell them," said Panton.

"So what happens? They (residents) plan to block the road, and the media house is there, photographing it, filming it. The question I want to ask them is, did they tell the police that there's a problem that is going to be brewing in such and such an area, the road to Montego Bay is going to be blocked, did they do that?" he asked.

The judge also criticised what he termed as lack of accuracy by the media in the reporting of certain news items.

"I heard on the radio that a former judge is to be tried for something. It is not true. The person was not a judge … it would be appropriate if the persons who are writing news items do so accurately," said Panton. "The individual concerned was appointed to act briefly as a resident magistrate and was reverted, so it is not true to say that this person was a judge."

The judge's remarks were made following the Court of Appeal's fourth day of sitting at the Lucea Resident Magistrate's Court in Hanover.

The Court of Appeal made history on Monday, December 9, when it heard appeal matters for a week outside the Corporate Area for the first time since its establishment after Jamaica gained Independence in 1962. Panton presided over the week-long proceedings, which ended last Friday, alongside fellow High Court justices Dennis Morrison and Patrick Brooks.