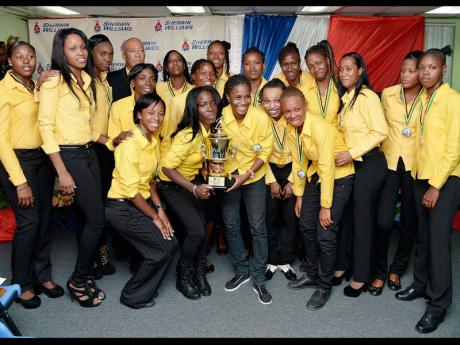 Members of the Barbican Women's football team shortly after they were presented with the championship trophy at the Jamaica Football Federation offices in New Kingston, yesterday. - Ian Allen/Staff Photographer

Sherwin Williams Limited will continue its sponsorship of women's football competitions locally as the long as the resources are available, managing director Ian Forbes said yesterday.

Forbes disclosed that at the presentation ceremony for the Sherwin Williams Women's Premier League and Colourscape Knockout football competitions at the Jamaica Football Federation offices in New Kingston, yesterday.

"As long as we have resources we will continue to support the women's competitions. We believe that something huge is coming for women's football, and it will not be long," Forbes told the gathering.

He said that since his company took over the sponsorship of the women's league, it has improved and the national teams have benefited.

"I have no doubt that women's football is in good hands with the likes of stalwarts Elaine Walker-Brown, Jackie Cowan, Lorraine Scringer and Gene Nelson. It was another successful and well-run competition. Congrats to Barbican FC for winning all three competitions." Forbes remarked.

"I want our ladies to understand that the JFF has great interest to advance women's football in Jamaica," Burrell said.

"Sherwin Williams has been critical to the development of women's football as they have sponsored the women's league for over a decade. We have good administrators and talent in the league," he added. Barbican, coached by Charles Edwards, were the toast of the ceremony as they walked off with the Sherwin Williams Women's League title, the Mid-season trophy and the Colourscape title for 2013.

The Barbican team won the league for the sixth consecutive year and ninth overall. They collected the trophy, medals and $400,000, while beaten finalists G.C. Foster College received $250,000.

Barbican captain captain Philisha Lewis was voted the Most Valuable Player for the league, while coach Edwards was the coach of the year.

Rashana Palache and Kay-Ann West, both of G.C. Foster College, were recipients of scholarship awards courtesy of Sherwin Williams Ltd.