Tessanne, the measure of a true artiste 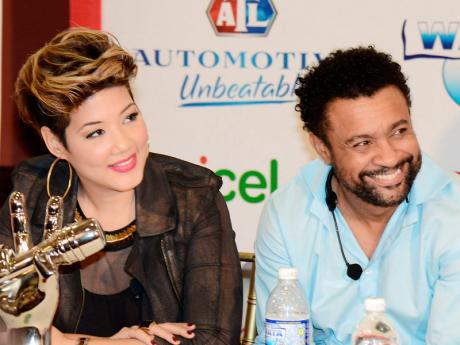 Tessanne Chin and Shaggy at the Norman Manley International Airport on her return to Jamaica last Friday after winning the talent show, 'The Voice'. - Ricardo Makyn/Staff Photographer

"I wanted and expected her to not go very far in the competition. I'd written her off as 'an uptown singer', good enough but able to have a moderate career because of privilege, because of Jamaica's only partially dismantled connection between what you get to do and how you look ... .

"In Jamaica, some people who view the world through a racial prism see her as a 'browning' - a lighter-skinned Jamaican whose colour translates crudely into class privilege." - Colin Channer

I must admit that I had a similar initial reaction to Mr Channer. Keyword, 'initial'. But after seeing Tessanne Chin perform week after week on NBC's singing competition, 'The Voice', I felt her soul, I saw her struggle; I began to identify with this woman, this person, this artiste.

I never knew Tessanne Chin's music before. I left Jamaica early in 1999 to pursue a bachelor's degree overseas. But whatever baggage I may have left with pertaining to class and Jamaica's well-disguised complex of shadism were stripped away by Tessanne Chin's talent and charisma.

Her assumed privilege became secondary to what I was experiencing in the moments I tuned in to 'The Voice' and heard her sing or speak. No longer did it serve as a barrier.

As human beings, we have a bad habit of categorising people, putting labels on them for the sake of our own limited understanding of them. I thought the article Channer wrote did this without any intention to do so. What I witnessed was a conscious effort to wrestle with the subconscious, for his thesis wavered, each time casting a negative light then attempting to take it back.

As an artiste, I look at Tessanne as another ambitious artiste who wants something so badly, that she was willing to step out of Jamaica, outside of her comfort zone, and take a chance. Her stripes are visible - the stripes you earn as an artiste who has heard 'NO' so many times but kept moving, kept trying. And tried she did.

It was Marlon James who sat down with me and told me a year ago, as a new author learning to navigate the publishing realm, that Jamaicans aren't going to be the ones to read my book; it will be the American market. If I were to stay in Jamaica and publish, I would be running on that proverbial treadmill like Tessanne described in her December 19 interview on The Kelly and Michael Show.

Marlon's advice was a hard pill to swallow. I understood why Tessanne did what she did. Though she may look privileged, according to Colin Channer, she had been running a marathon barefoot for years. It wasn't Tessanne Chin's assumed privilege that got her where she is, it was hard work and dedication.

Tessanne Chin wanted the world's attention, knowing that if she gets it, her own people (the ones who weren't familiar with her or who didn't like her alternative/rock fusions) would embrace her.

Channer has a point when he alluded that Chin is not the typical 'Jamaican artiste' in the sense of class and colour. But according to who? Hot 97 FM? BET? The image sold to the world on dancehall? Aren't we more than that as a people?

Such argument should be negated when the veils are pulled aside and we see the ambition of this woman, this artiste, who was not willing to simply sit on whatever padded stools she was given. That is the measure of a true artiste - someone like Tessanne who has done the work and has a fair share of rejections to prove it.

My writing mentor, renowned author, Marita Golden, always reminds me that the most successful artists are the ones who persevere, saving up all the rejections, and let-downs, and snobbery, and using them all as fuel. And when they take off, like Tessanne Chin has, there is very little anyone can do to stop them or insult them.

Nicole Y. Dennis-Benn, a Jamaica-born writer, is a faculty member in the English Department at the College of Staten Island. Email feedback to columns@gleanerjm.com and follow her on Twitter @Brooklyn_soul10 and her blog at http://ruminations-of-a-brooklyn-soul.blogspot.com/