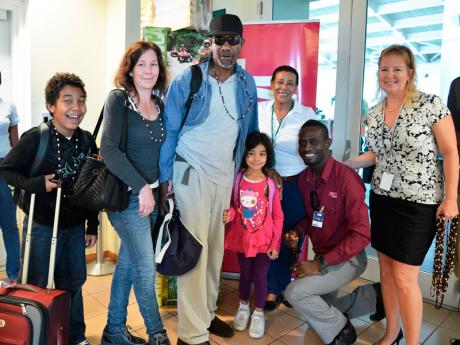 Westmoreland expatriate Bevo Johnson (third left), of Denver in Colorado, arrived at Sangster International Airport in St James with his family on Sunday, on the inaugural Frontier Airlines flight from Denver to Montego Bay. With him (from left) are his son, Joseph; wife, Merissa; and daughter, Jay. At right are members of the Montego Bay welcome team Granville Morgan of the Jamaica Tourist Board (stooping), and chief commercial officer for MBJ (Montego Bay Jamaica) Airports Limited, Elizabeth Brown Scotton. In background is guest relations manager of the Jamaica Tourist Board, Margaret Jones. Photo by Claudia Gardner

The tourism mecca of Montego Bay, St James, this week welcomed Frontier Airlines' inugural flight between Denver, Colorado, and Montego Bay, which landed at Sangster International Airport on Sunday afternoon, with 115 passengers onboard.

According to chief commercial officer for Montego Bay Jamaica (MBJ) Airports Limited, Elizabeth Brown Scotton, the flight is crucial to the island as it is expected to open up key gateways from west and midwest United States into Jamaica.

"Denver is one of the largest airports in all of the United States, and a significantly-major hub," Brown Scotton told The Gleaner. "For us, this is very important because Frontier hubs in Denver, and so now we have access not only in Denver, but all the key markets from the midwest and western parts of the United States, in a way that we never had connectivity before."

She added: "Their service is incredibly important to Jamaica, providing us with a market from the western part of the United States that we haven't had. Denver is close to Arizona, New Mexico, California, Oregon, Montana, Wyoming, Idaho - all of those major states really have good connectivity into Denver, so we will be able to access those markets much more easily with this flight."

Brown Scotton said the non-stop service provided by the 148-seat A319 aircraft, would be offered weekly during the winter tourist season, up to April 2014, and that forward bookings from January to March were already looking very promising.

She said, in addition to becoming a new holiday destination option for people within the United States' west and mid-west, the new Frontier route would also open up gateways in Canada.

"If Denver does really well, then maybe other airlines that also hub in Denver might also be attracted. Denver has a colder climate, so we know that people there are looking for new destinations to come to. They have been going to Mexico and Hawaii for years, and Jamaica offers them a new opportunity and a new place for them to vist, so it is very significant to us to see that market open up. It is a little bit over five and a half hours to fly here. It's close to the Rocky Mountains, so they get cold winters so they are going to love the beautiful Jamaican warmth," she said.

"Denver connects really well out of western Canada and we actually don't have enough capacity coming out of Western Canada. Vancouver, Edmonton, Calagary and Winnipeg (in Canada) are all served at least on a daily basis into Denver, so it makes it easy for them to connect through Denver and into Jamaica other than flying on the charters that come out of western Canada," she said.