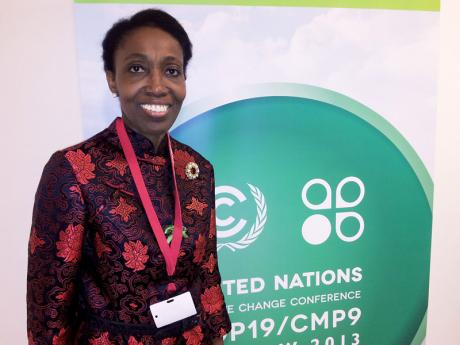 Dessima Williams … women as delegates can bring to the table what their experiences are with agriculture, sea level rise, transportation, as well as men. - Petre Williams-Raynor/Photographer

The move to increase women's participation in the global effort to combat climate change gained impetus at the recent Warsaw Talks in Poland.

An in-session workshop held on gender, climate change and the United Nations Framework Convention on Climate Change (UNFCCC) provided insight into the status of efforts to enhance the role of women and laid the foundation for next steps.

The workshop prompted proposals to, among other things:

Establish a framework, with a time frame, under which action on gender balance and gender-sensitive climate policies could be undertaken under the Convention and its Kyoto Protocol;

Monitor the gender balance; gender budgeting and gender-sensitive climate policies and actions by Parties under the Convention and its Kyoto Protocol; and

Provide training and awareness-raising for male and female delegates on issues related to gender and climate change.

"[The discussions also examined how] people can better link gender balance and adaptation, mitigation [and] finance. These topics could not be developed more [at the time] but we discussed them and I think the decision gives some encouragement to governments to go in that direction," said Dessima Williams, former ambassador of Grenada and now Expert adviser to the UNFCCC on gender and climate change.

According to Williams, only good things can come from an increased look at climate change through a gender lens.

"Women and men in society experience everything differently because of their social roles and that includes natural disasters. So what we are saying is that they both need to be involved in decisions on climate change - for the country and for the global structure, which governs climate change policy. We want more women at the table," Williams said.

Current statistics reveal that the majority of UNFCCC bodies and the Kyoto Protocol have memberships where less than 30 per cent are women, with lows of 11 to 13 per cent in some cases. At the same time, it is estimated that women make up less than 20 per cent of delegations to the climate change negotiations.

THE POWER OF WOMEN

"Women as delegates can bring to the table what their experiences are with agriculture, sea level rise, transportation, as well as men. And if they are a delegate, they could speak about that [and] governments could take on board all experiences; many countries don't, especially small countries like our own," said Williams, also a former chair of the Alliance of Small Island States.

She added, "We want women in the conversation, both in terms of what the challenges are and what the appropriate domestic and international solutions should be."

Williams maintained that all stakeholders have to be a part of the conversation on climate change if solutions that reflect the interests of all are to be reached.

"You can't have successful climate policies without everybody's participation - young, old, male or female, people in agriculture, people in industry - because, unfortunately, climate impacts are on all of us," she said.

And, Williams added, the Caribbean must "because it speaks to our reality as a region where men and women experience society and experience climate change differently.

"Gender balance at the climate change decision-making table says that we need to have the input of women and men so as to capture the differences that they experience and, therefore, tailor policy to suit and adjust that difference for greater equality and progress," she said.