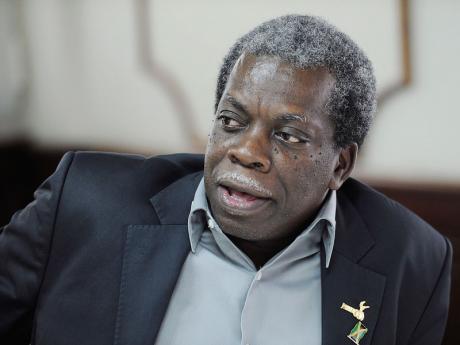 Environmentalists are up in arms over the Government's decision to defer Jamaica's application to the United Nations Educational, Scientific and Cultural Organization (UNESCO) for the Portland Bight Protected Area to be declared a biosphere reserve.

This follows confirmation Friday that the process which had been on track for Jamaica to become only the second country in the English-speaking Caribbean, after St Kitts, to establish a biosphere reserve was derailed by the State, for no good reason according to a number of persons intimately involved with the tedious eight to 10-year application process.

The area takes in land earmarked to be co-opted as part of the port facility if Government goes ahead with plans to use the Goat Islands as part of the proposed logistics hub the Chinese Government is seeking to build in Jamaica.

Last October, Transport Minister Dr Omar Davies told Parliament that China Harbour Engineering Company (CHEC) and the Port Authority of Jamaica would continue to have discussions to refine aspects of the project with a view to having a framework agreement finalised by the end of this month.

If the project is approved by Cabinet, it will then be submitted to the National Environment and Planning Agency which will outline terms of reference for an environmental impact assessment.

The unwillingness of officials in the Ministry of Water, Land, Environment and Climate Change to comment on the deferment and whether or not the Government has in fact withdrawn the application has led to speculation that the latest move is designed to buy the State more time to advance plans relating to that project.

"I know it was a matter under consideration, but I don't know what the final thing is" Robert Pickersgill, the climate change minister told The Gleaner on Friday, before directing Everton Hannam, secretary general of the Jamaica National Commission for UNESCO, to speak with The Gleaner on the matter.

"Jamaica has requested a deferment in its application for the Portland Bight site to be named a biosphere reserve," Hannam acknowledged, pointing out that the decision was made late last month.

The reason put forward for the deferment, that the climate change ministry wants to revisit the zoning issue, has been dismissed as fallacious by Ingrid Parchment, executive director of the Caribbean Coastal Area Management Foundation.

Parchment told The Gleaner that, upon submission of the document in 2012, UNESCO indicated the need for clarification in respect of some of the three fish sanctuaries in the area and this matter was addressed and the application re-submitted in November 2013.

In fact, she said UNESCO consultant June Mare Mow visited the island over three days and walked the site, where everything was explained to her, with the necessary follow-up work submitted.

"We were quite confident because we met as a group to decide on what this new zoning would be, that we agreed on it. In essence, we had agreed what the zones were and we didn't change anything but really clarified it for them. We showed how much of it was marine and how much was terrestrial and as far as we were concerned, there were no issues," Parchment shared.

"I am really quite disappointed that after all these years of putting in all of this effort; having all of the stakeholders at different levels agreeing that this was a good idea, that the Government just kind of went behind people's back," the frustrated environmentalist told The Gleaner.