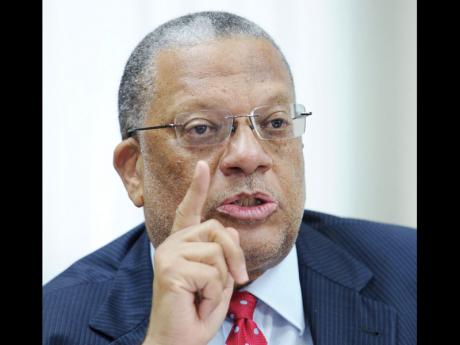 Minister of Finance and the Public Service Dr Peter Phillips has asserted that he harbours no intention of imposing new taxes on Jamaicans in 2014.

At the same time, Phillips has set in motion a busy schedule in the New Year to complete a tight financial-legislative agenda in keeping with International Monetary Fund (IMF) requirements ahead of the culmination of the 2013-2014 legislative year, which ends March 31.

Phillips highlighted expectations of several positive developments in 2014, including growth, lowering of the commercial interest rates, and the stabilising of the local currency, even as he stressed that all would not be hunky-dory on the economic front.

Missed revenue targets have fuelled speculations in the public domain that heavy taxation is inevitable this year, but while conceding that this is the case, Phillips suggested that they have been largely overstated.

"The revenue targets have been missed slightly in relation to taxation, and I say slightly, although the numbers loom large because they have reached approximately 97 per cent of the targets," he told The Gleaner.

Phillips reiterated that there were two ways to stop the rapid accumulation of debt: cut expenditures or increase revenues. "That is a reality that we face, but we have committed to an open discussion about our alternatives and that is why have laid the fiscal policy paper before the House."

He emphasised that such a course of action was critical if increased growth levels were expected to be sustained.

Phillips also listed some of his expectations in 2014, among them implementation of some of the major projects that constitute part of the Government's growth agenda.

"I expect that we will see continued trending downwards of the interest rates and increased lending by commercial banks, particularly to businesses. I expect to see improved investor confidence, both domestic and foreign, in relation to the economy. We will still have a market-determined exchange rate, and I expect that the value of the Jamaican dollar will level off and see increased positive momentum in the economy."

But he warned that tight budgetary circumstances continued to be necessary. "We have overcome many challenges, but we are still facing difficulties, which I expect us to overcome," said Phillips.

He and his team have until March 31 to propel several key pieces of legislation through Parliament in keeping with IMF commitments. These, he said, included the Insolvency Bill, Amendments to the Banking Act, as well as the Bank of Jamaica Act. He said legislation aimed at strengthening the fiscal rule was also on the Parliamentary agenda before the end of the 2013-2014 FYI. This, Phillips said, was intended to prevent debt overruns, establish controls on the accumulation of debt, as well as statutory limits on debts and procedures for contracting debts and potential penalties for breaches of the fiscal rule.

"The primary focus of the fiscal rule is to ensure that future generations don't get saddled with a huge debt burden such as this generation's burden," stressed Phillips. "Those bits of legislation have to be passed before the end of March."