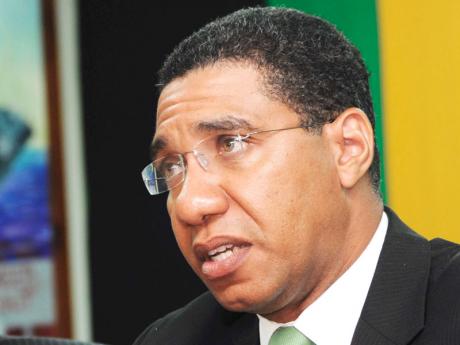 FOLLOWING WHAT appears to be prolonged delays regarding plans to establish a logistics hub in Jamaica, Opposition Leader Andrew Holness wants the Chinese investors to divulge whether they still have an interest in the Goat Islands.

At the same time, Opposition Spokesman on Industry, Investment, Mining and Energy Karl Samuda is cautioning that the Chinese could begin to look elsewhere to establish its logistics hub while the Government moves at a snail's pace on the proposed multibillion-dollar investment.

Holness and Samuda both raised concerns yesterday about the much-talked-about project at a Jamaica Labour Party (JLP) press conference at the party's headquarters, Belmont Road, in Kingston.

"There is too much uncertainty around the Goat Islands issue," Holness said.

The opposition spokespersons made it clear that the JLP supported the logistics hub project on the basis that environmental conditions on the Goat Islands were not abused.

Samuda said the Government was taking a long time to react to the environmental concerns. "Instead of placing it on a fast track, indications are that it is moving at a snail's pace to the extent that our competitors for the establishment of logis-tics centres throughout our region have gone ahead of us."

Samuda said whatever decision is to be made in relation to the Goat Islands should be made with dispatch "because time is not on our side and we cannot continue to languish in this flat economic climate".

He wants a full explanation from the Government on the status of the logistics hub.