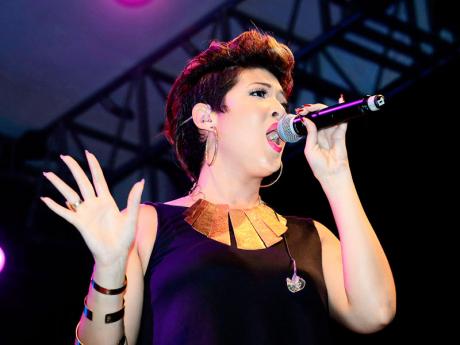 Tessanne Chin, Jamaica's latest international star, is no stranger to the world of music. She is the granddaughter of a well-known musical family.

Her grandfather was Kes Chin, leader of Kes Chin and the Souvenirs Band, which entertained fans in the 1970s and 1980s at shows and dances. His daughter, Ingrid, formed a female band, Ingrid Chin and the Carnations.

Richard, son of Kes Chin, played the drum in various bands but went on to do sound and lighting for stage shows. Fortunately, he built a home studio for his family which included Tessanne and sister Tami, another songstress.

Surrounded by so much music, no wonder the family produced Tessanne as winner of the recent NBC talent show, The Voice, with huge audience acclaim by cybernet votes and spectators in the auditorium.

The Jamaican diaspora abroad was ecstatic about her performances and dutifully voted for her in droves. She won with huge applause at home and abroad.

Tessanne and Tami are at home on the stage in musical events. But they have to carve out their own repertoire of songs from the world of international pop music: R&B, rock, jazz, jive, and so on. Naturally, this diminishes their appeal to the majority of Jamaicans who want reggae and dancehall. But it does not diminish the quality of their singing.

When Tessanne entered The Voice, the music was much more in keeping with the genre in which she specialises. In Jamaica, this is referred to as 'uptown' music, distinct from the reggae and dancehall which are popular downtown. She was on safe ground as she was performing for audiences similar to the Jamaican uptown, not downtown. She was, therefore, as we say, in her 'ackee', and she moved through the performances like a professional on home ground.

Meantime, she was creating history by selecting songs popular here in the pre-Independence period before Jamaican popular music emerged with a bang that, within the decade, replaced much of the standard international hits of the 1940s and 1950s.

With 'downtown' music, the ska rhythm emerged, along with an accompanying dance style: body bent at the waist and arms swinging to a frenetic rhythm. For this to move uptown, the radio stations had to be convinced to displace some of their standard foreign recordings. The advent of the Millie Small ska 'cover' of Barbie Gaye's hit, My Boy Lollipop, of the previous decade, quickly went to number two on the English hit parade and third in the USA.

This convinced uptown Jamaicans that with hits in London and New York, Jamaican music must be worthwhile. Soon after, RJR and the recently established JBC would join in the popularity, more so JBC, which added a one-hour Teenage Dance Party programme devoted to Jamaican music.

Meanwhile, I had introduced Byron Lee, leader of Byron Lee & the Dragonaires, to ska and he immediately added it to his regular uptown Saturday night dances. Fans caught on quickly, and the downtown music became the national music of Jamaica.

Tessanne has, by virtue of her 'Voice' triumph using standard international hit songs, reintroduced to Jamaica the forgotten period when that type of music was popular. Judging by the enthusiastic response she has justly received, she has opened the door to a return to history when melody ruled.

A great many Jamaicans will now welcome this return after many, many years of the rhythm-based music in dancehall. Better yet, if this music gets support from other artistes who would now see it as a career opportunity.

Jamaica would enjoy a broader range of musical styles. I think of Anna and Samantha Strachan as examples of good singers trained in Jamaica and abroad who can lift our music to new heights. The difficulty will be the lack of available compositions in this genre.

In a country in which reggae is a well-known brand, locally and internationally, it is shameful that so little effort is made to keep the brand alive. Most reggae is now composed overseas in countries which have seized the initiative from Jamaica. Maybe some international reggae hits will soon be composed in foreign countries and exported to Jamaica, reversing the course of history.

It always amazes me that the beautiful melodic reggae songs which used to be composed so frequently came to such a sudden end as if the generation of reggae composers of the 1960s and 1970s all died leaving no talent behind. It is a drought which must come to an end soon.

One way of dealing with this is to 'cover' selections from the vast repertoires of beautiful songs which have previously been hits. My Boy Lollipop was published in the 1950s and covered by Millie Small a decade later, becoming a hit for a second time.

Yellowman covered the well-known traditional song I'm Getting Married in the Morning by attaching a deejay segment of his own to each stanza. Someone Loves You Honey was another overseas hit, covered by the Jamaican vocalist June 'J.C.' Lodge, and Love Has Found Its Way was a Dennis Brown cover.

Recording covers is not a Jamaican practice. For instance, Clyde McPhatter's cover of White Christmas in the 1960s - originally sung by Bing Crosby, king of crooners - was a huge hit that improved on the original. Perhaps of even more importance to Jamaicans was The Tide is High by the Paragons, a top Jamaican rocksteady harmony group, which was covered by the American singer Blondie, who sang the international hit Heart of Glass in the 1970s.

I know that in The Voice, Tessanne sang Bridge Over Troubled Water by Simon and Garfunkel with the great passion which that hit demands. It was her standout performance. There can be others. If I had my wish, I would love to hear her sing one of Jamaica's best love songs, Cottage in Negril, by Tyrone Taylor. Cover it, Tessanne; it's hard to beat!

Having reopened the door to the world of sweet melodies, it is up to Tessanne to add reggae rhythms to lead off with reminders of what real reggae was before it perishes as history.

Edward Seaga is a former prime minister. He is now chancellor of the University of Technology and a distinguished fellow at the UWI. Email feedback to columns@gleanerjm.com and odf@uwimona.edu.jm.