'The Bold Ones' raring to go 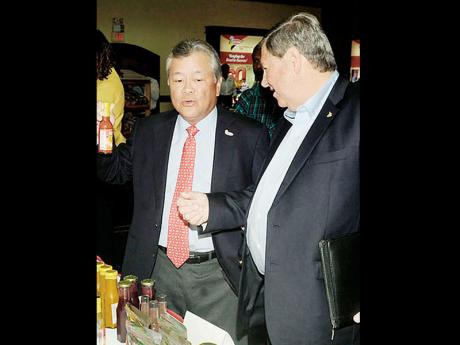 Hot stuff: Continental Baking Company Chairman Gary 'Butch' Hendrickson (left) shows Jamaica Manufacturers' Association (JMA) President Brian Pengelley a bottle of red pepper sauce, made by Lincoln's, one of the companies chosen as this year's National Bakery Bold Ones during the official launch of the programme at The Jamaica Pegasus hotel. - Contributor

The latest group of National Bakery's 'The Bold Ones: New Champions of Manufacturing' was announced recently by Gary 'Butch' Hendrickson, chairman of Continental Baking Company Limited. After an extensive search led by Steven Sykes, director of operations, eight new entrepreneurs were identified and will receive a wide range of benefits under National's innovative programme to support manufacturing.

According to Hendrickson, 'The Bold Ones' series is one of the best ways to create well-needed employment and motivate aspiring Jamaicans to consider the creation of their own enterprise as a viable career path and to promote manufacturing and production as a part of the solution to Jamaica's future economic growth.

"The Bold Ones: New Champions is a bid to create more market opportunities for small business owners, enabling them to make greater contributions to the manufacturing sector with respect to increased advertising presence," Hendrickson said.

This is the third time that National Bakery will be endorsing and marketing these beneficiaries in the biennial programme launched in 2010, bringing their sponsorship of a total of 27 companies to approximately J$90 million.

Over the next six months, they will receive multimedia promotional packages, extensive advertising and publicity and be hosted by National Bakery at its pavilion at the upcoming EXPO Jamaica 2014. In addition, over the next two years, their advertisements will be carried on the sponsor's trucks that traverse the island.