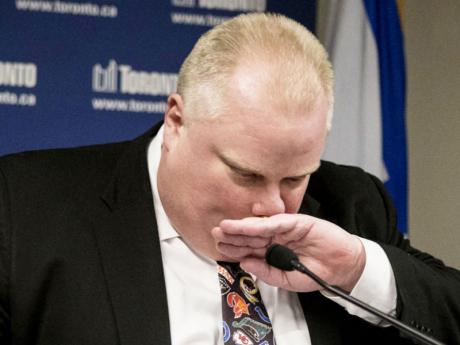 Toronto Mayor Rob Ford has been cast back into the headlines following the posting of a controversial video online showing him cursing in a Jamaican accent and using Jamaican expletives.

The video, which is one minute and 16 seconds long, shows the mayor standing at a counter in a fast-food restaurant ranting in Patois and using indecent language as he spoke with two men whose faces are not shown.

The restaurant has been identified as a steakhouse in Etodicoke, a suburb in Toronto.

Ford, who is no stranger to controversy, can be overheard saying, "They chase me around for five months, mon, (expletive). Leave me alone, mon. They got me five months, mon. They're trying to tell me we're counter-surveying you. He's here and I'm here … cho (expletives)!

At the centre of his rage is Police Chief Bill Blair.

Royson James, a columnist at The Toronto Star, told The Gleaner that most Canadians do not understand what Ford is saying in the video, and some radio stations even played the recording verbatim repeatedly, until some Jamaican callers informed them of its obscenity.

"It's one of those things like when you hear a French swear word for the first time. It doesn't have the same effect when you hear it in English. They played it word for word without the beeps, except for the F word, but left the rest."

James said it will be hard to predict if this latest controversy will prove perilous to the mayor's office or his re-election campaign.

"It's tough to know how anything is going to affect this guy's campaign. This is just one of a long list of transgressions. This is a guy who admitted to smoking crack cocaine, and he admitted to drinking and driving … . The problem is there is nothing legally the city council can do to remove him from office," James said.

But he added that it was highly unlikely that those with the necessary political autonomy would sanction Ford's removal or dismissal.

Ford has already started his re-election campaign in preparation for the October 27 polls. For one Jamaica-born Canadian, Altiman Grason, Ford's command of Jamaican Patois will only guarantee more votes and increase the admiration that the voting public has for him.

"Rob Ford can talk Patois? I love it. A now the man ago get vote. The people love him; mi done tell you. The man gives his politician dollars to the poor. They even made bobblehead dolls with the man. The man famous," he said.