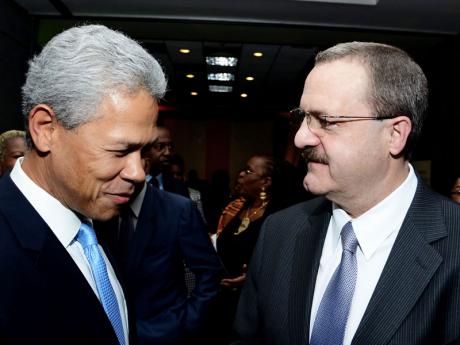 Gregory Fisher, managing director of investment firm Oppen-heimer & Company, says Jamaica will continue to have access to the international capital markets for fundraising as long as the perception remains that it is holding firm to policy directions under the Inter-national Monetary Fund programme.

Noting that Jamaica had debt obligations soon to mature and additionally, that the Government will be seeking to refinance external debt, Fisher said that the response of the capital markets is likely to be positive as long as the perception of fiscal discipline prevails.

He said Jamaica will soon face about US$400 million of bond payments; and that later in the year, another bond for €150 million would mature, and the Government had signalled its intention to re-finance.

"If successful, it will be a positive signal on the global market for Jamaica. Jamaica will continue to do well on the capital market as long as it complies with the IMF," he said at the opening of the annual Jamaica Stock Exchange Capital Markets and Investments Conference in Kingston on Tuesday night.

Fisher, who was one of the opening speakers at the annual Jamaica Stock Exchange Capital Markets and Investments Conference in Kingston on Tuesday, also addressed developments in the markets in his country, saying the US stock market was overdue for a correction and that stocks would become cheaper this year as the Federal Reserve moved to end its bond-buying stimulus programme, which has kept values high for over 20 months.

Market fundamentals, he said, would now take over and likely result in a downward adjustment and an end to the sustained bull run in equities.

The Federal Reserve was buying up to US$85 billion worth of bonds monthly under the stimulus programme known as quantitative easing.

"In the United States, there has been positive growth at snail's pace, but it is still growth. The economy is more stable and solid, but this does not translate to the market in equities," the investment manager said.

Supported by the Fed

Noting that the US stock market had experienced a sustained bull run for 28 months "synthetically supported by the Fed", Fisher said that when this support is withdrawn, "the fundamentals will have to take over. Stock market valuations will get cheaper."

Other factors promising lower out-turns for 2014, he said, were employment data which indicated that millions had left the labour market, the disinclination of managers and business owners to beef up capital expenditure within the current climate, and "Uncle Sam's debt burden, which continues to climb".

Turning back to Jamaica, he said fiscal order within the public sector would create new openings for the private sector; tourism was showing signs of strength with the new milestone of two million visitors last year; and that planned development of the ports and a global logistic hub offered hope of diversification and a cushion from global shocks.

Altogether, Fisher said, the indicators promised "no sunrise expectations in GDP growth, but they would set Jamaica on a higher path to growth."