BOOK REVIEW - Believers: An intriguing look into the world of the occult 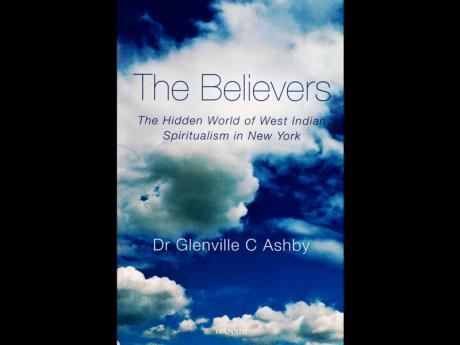 The Believers - The Hidden World of West Indian Spiritualism in New York by Dr Glenville C. Ashby is a regular 'jumbie story', and then some more. This intriguing work focuses on the core beliefs of the West Indian immigrant in the most modern and hard-edged of metropolises. These are beliefs that operate in tandem - sometimes secretly - within the hearts, and in the actions of the West Indian migrant community.

While this book has its share of the jolting and jaw-dropping, there is little in the way of the spine-tingling and macabre concoctions associated with Stephen King and his genre. This is about real people, with real problems, real fears, and who reach, somewhat tremblingly, for the relief and comfort in their ancestral traditions and the occult.

In The Believers, Dr Ashby provides readers with surprises, confirmations and an appreciation for religious beliefs and magical practices.

This book is a collection of curious, fluid revelations that is somewhat loosely interconnected. It is a search for spiritual help in an unforgiving environment.

New York City is the setting, and the characters are mainly Jamaicans, Guyanese, Haitians, and 'Trinis', with a handful of small-island denizens thrown in for good measure. It is a methodical, slow-moving development with context and colour supplied by immigrant sketches, their embedded fears, against the backdrop of grey winters. These are fused together to form a sobering, if not compelling picture; indeed, many pictures.

Readers are treated to the names, language, and tools of the spiritual and occult arts in a cold, matter-of-fact prose. Here, in the concrete jungle of New York City, one is afforded more than a fleeting peek into the mysteries of Kali, Obeah, Voodoo, and Orisha practices.

There is the familiar talk of 'spirit lash' and an introduction to spiritual work performed in graveyards and the damage they inflict on victims. There is disclosure of the significance of 'mourning' and access to the sanctum sanctorum of spirit worship. This same 'mourning' is described as "the greatest spiritual experience".

There is the occasional flash of flair, but this work is all about facts and circumstances in constant movement.

In all of this, there are the unfamiliar names, the unintelligible words, and the unwavering principal characters. In this repeated journeying to the other and dark forbidden side, there is revealed the conflict between 'good' and 'bad' practitioners.

In the search for answers, seekers and believers traverse from house to church to cemetery. "You must know the depths and heights of wisdom to understand the mysteries of life" is a dominant and guiding philosophy of these believers.

Dr Ashby lays bare a different kind of world, of which one whispers, frowns upon and is feared by many. There is the use of protective passwords; the extreme physical contortions and convulsions; superhuman feats; trances; exorcisms; and the presence of the 'evil eye,' curses and malevolent spirits. And while the doors are open to the uninitiated public, it is still a murky world lathered in the clandestine. There are even shades of Masonic rites in some of the revelations.

There is hesitancy on the part of some newcomers, sometimes trepidation, but never indifference or outright rejection of these fascinating belief systems. Not surprisingly, readers would experience the layering and fusion of mainstream (and acceptable) religious involvement with the more earthy practices of voodoo and Kabballah.

There is the mixture of occult elements with religious emblems; the Old Testament Book of Ezekiel comes in for special mention. Roman Catholicism and Hinduism are generously represented, with snippets from Islam.

Undoubtedly, the Babalawos, Pujarees, and Grandmasters are the real community leaders. They wield the real power and influence in the diaspora. They make the listener and observer stand up and pay attention.

The Believers: The Hidden World of West Indian Spirituality in New York is an eye-opening, enthralling look into the sheltered world of the occult, as practised by Caribbean folks as they pursue health, happiness, upward mobility, and the American dream.