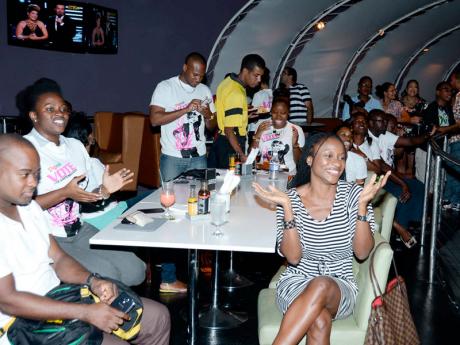 Usain Bolt's Tracks & Records was one of the places to be during 'The Voice', last season. The trend continues into the new year with the viewing of the Grammys tonight. - Winston Sill/Freelance Photographer

The Staples Center in Los Angeles might be where the awards will be handed out, but Usain Bolt's Tracks & Records (UBT&R) on Constant Spring Road will be the Grammy hotspot tonight.

Patrons are invited to party in true UBT&R style at the first-ever Grammy Awards viewing party.

Nicolette Dewar, marketing manager at KLE Groups Ltd, said UBT&R decided to host a viewing party for the Grammys because it was "the perfect way for patrons to chill and watch in fine style with great food and Skyy Vodka specials all night".

Guests won't miss a minute of the live show as all 42 screens inside the venue, including the big screen, will be in operation.

Dewar says promoters of the event are expecting a full house "with lots of vibes and excitement as we support our fellow reggae artistes". Managing director and editor-in-chief of Nirvana Magazine, Londie Murray, said that partnering with the KLE Group and UBT&R was a no-brainer as the company "strategically-aligns itself with events that allow an opportunity to connect with fashionable persons".

Patrons are also encouraged to don their Sunday best as a special prize will be given to the best-dressed male and female.

Murray says the watch party at UBT&R will be a "great way to spend the Sunday evening and its free"!

Jamaicans at home and in the diaspora will be most interested in the Grammy's Best Reggae Album category.

Nominations this year have gone to Sizzla Kalonji for The Messiah, Beres Hammond for One Love, One Life, Ziggy Marley for Ziggy Marley in Concert, Sly & Robbie and The Jam Masters for Reggae Connection, and Snoop Lion for Reincarnated.

Sizzla is a first-time nominee and earns the nod after 70 albums. Snoop Lion joins him as a newby in the category, though he has had 15 nominations as a rapper with the moniker, Snoop Dogg.