Marcia Griffiths enjoys 50 of the best 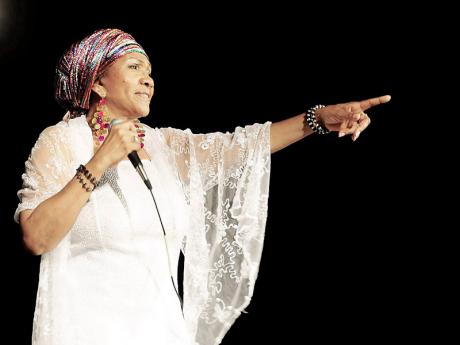 She began her entertainment career at a 1964 Easter morning concert at the Carib Theatre in Cross Roads, Kingston, Jamaica, where, as a 9-year-old, she literally brought the house down with a rendition of No Time to Lose, made popular by the American singer, Carla Thomas.

Phillip James, one half of the popular Jamaican singing duo, The Blues Busters, heard her singing at a neighbourhood get-together and insisted she perform at the concert, which was spearheaded by the top-flight Jamaican band, Byron Lee and the Dragonaires.

Griffiths' performance was of such that she immediately had record producers jostling to get her under their wings.

The main contenders were Ronnie Nazrala, Byron Lee's manager, and Clement Dodd of Studio One.

Griffiths explained in the book, Reggae Routes, that: "They both wanted me to sign contracts with them, They were at my house day after day, talking to my father. I decided to go with Coxson because he was really happening then, and I liked the vibe".

In one of music history's most unusual occurrences, Griffiths was taken to Studio One on the same day she signed by Radio Jamaica's ( more popularly known as RJR), Lynford Anderson, where she recorded without having an audition.

That first recording, titled, Wall of Love, was never released, but it did set the stage for what was to come in later years.

It was a period in which she attached extreme importance to the propinquity, dedication and inspiration of her father.

At Studio One, Griffiths was fortunate to have met Bob Andy, whom she met earlier at rehearsals with the Paragons group in Rockfort, East Kingston. Her fortunes multiplied when she realised that Bunny Wailer, her kindergarten schoolmate, was also in the Studio One fold.

It, therefore, didn't take much for her to get acclimatised to her new surroundings. The astute Studio One producer, Clement Dodd, at first placed her in duets with some of the top male singers.

With Tony Gregory, she did You're Mine, with Bob Marley, Griffiths sang Oh My Darling, Words with Jeff Dixon, and with Bob Andy, she did Always Together.

In a 2010 interview with me, Griffiths spoke about how seriously she began taking her music after seeing Bob Marley's approach.

However, the relationship with Bob Andy seemed most crucial to her future development.

"We had an intimate affair. I knew most of the songs he wrote for me and himself had to do with the relationship, especially Desperate Lover," she said.

Desperate Lover is a haunting love song that ran in part:

How do you feel when your baby's gone

You toss and turn, you cry all night

That apart, Andy wrote all her earliest hits, incontrovertibly sending her on the road to success.

The first was Feel Like Jumping, a 1968 No. 1 hit arranged by keyboard maestro, Jackie Mittoo, and enunciated by the 14-year-old.

That hit was followed by a string of other Andy compositions, which included: Mark My Word, Truly, Tell Me Now and Melody Life, the last of which had the typical Andy lyrical touch:

When you're in love it's a lovely life

When someone asks you to be his wife

It is so good for you to settle down

It doesn't pay for you to roam the town.

While still with Studio One, one of Griffiths' dreams, singing with a big orchestra, became a reality when she was spotted by a German talent scout as she performed with the Fab 5 band at the Sombrero Club. The scout invited her to perform along with the band in Germany in 1969.

Griffith spoke in glowing and mystifying terms about learning German before performing two songs given to her.

The artiste, who repeatedly pointed out that she had no formal training as a singer, left Studio One and began recording for producer, Harry Johnson, in 1969.

The union produced her biggest hit to date, Young, Gifted and Black.

Sung in duet with Bob Andy, the song held the No. 2 slot on the British charts (1970). This was followed by the duet's UK top-20 hit, Pied Piper, and two albums, which triggered an extensive European promotional tour by the duo.

Somewhere in the mix of a very hectic schedule, Griffiths found time to record the album, Sweet Bitter Love for producer, Lloyd Charmers.

Griffiths' next major assignment was to do backing vocals, along with Rita Marley and Judy Mowatt, (a group that became known as the I-Threes), for Bob Marley and the Wailers' 1970s albums, thereby filling a void created by the departure of Bunny Wailer and Peter Tosh.

The I-Threes first came together at the invitation of Dodd, sometime in 1973, to do harmony on a couple of songs for record.

According to Griffiths, she in turn, had some shows on that same weekend, and invited her two friends to do harmony vocals for her. 'Everybody loved us, so we decided to form a group. Marley heard them, and was convinced that they would be ideal for his group.

Towards the end of the decade, Griffiths had two outstanding albums, Naturally and Steppin' for Sonia Pottinger's Hi-Note label.

The latter showcased the excellent cuts, Steppin' outa Babylon, and her self-portrait, Peaceful Woman, in which she asks the question:

Tell me why do they always try to put me down

They slander my name all over the place

What a big disgrace

Some a them a try to take my place

But I wonder why they bother to try when they're oh so late.

Her 1982 No. 1 hit, Electric Boogie, became a landmark recording when it inspired its own dance craze - The Electric Slide - some six years later.

Created by Bunny Wailer from the inspiration of a rhythm box Marcia bought in Canada, it was a big hit in several countries.

Griffiths later formed an association with Donovon Germain's Penthouse records to produce the hits, Live On, Land of Love, I Shall Sing, Deep in My Heart and Everywhere.