Developing a logistics hub: a search for sustainable development 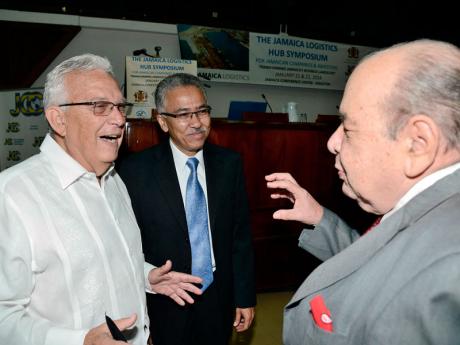 The following is from The ESL Blogs, produced by Environmental Solutions Ltd, a Kingston-based environmental management consultancy.

Talk of developing Jamaica as a prime logistics hub has taken on increased urgency since the start of 2013 as the expansion of the Panama Canal begins to wind down for the planned 2015 unveiling. This expansion, which began in 2007, has catalysed many countries in the Caribbean and Latin America to improve their existing logistics infrastructure, as more and bigger ships are expected to traverse the region.

With less than two years to go before the canal's completion, Jamaica again appears to be behind schedule, and there is a slight odour of panic in the air. Things have reached fever pitch over the past few months after Chinese investors, China Harbour Engineering Co Ltd (CHEC), identified the Goat Islands off the Old Harbour coast in St Catherine as their preferred spot for developing a US$1.5-billion port facility and logistics and industrial park.

Although this is not part of the Government's original logistics plan but an additional opportunity, it was on board immediately. However, environmentalists have aggressively protested this development because the islands, as part of the sensitive Portland Bight ecosystem, are protected under various international agreements.

The economy and environment

This has led to another chapter in the age-old debate of economy versus environment - can we build the one without sacrificing the other? With 12,500 twenty-foot equivalent unit (TEU) ships expected to pass through the Panama Canal come 2015, we stand to lose potentially billions of dollars in much-needed foreign direct investment and revenue if the proposed logistics hubs are not established in time, as we face competition from hubs in the Dominican Republic and Cuba, for instance.

The Portland Bight Protected Area (PBPA) is "not exclusively an environmental conservatory and is intended to facilitate multiple activities in a sustainable manner", according to the environmental management scoping study commissioned by the Port Authority of Jamaica (PAJ). It is already home to power, ethanol and cement plants, among others, but has suffered significant damage to its fisheries, particularly from dynamiting.

Jamaica as the fourth node

As it stands, Jamaica is seeking to become the fourth major logistics hub in the world, joining Singapore in Asia, Dubai in the United Arab Emirates, and Rotterdam in The Netherlands (Europe). Currently, Jamaica's cargo-handling capacity is not even in the same frame as these countries, so in order to become number four, several large-scale hubs have to be developed.

Singapore, which is roughly the size of Hanover, handles 32 million TEU containers through its terminal and about three million tonnes of air cargo annually. Dubai's free zone has 7,000 large multinational companies, and Rotterdam has the largest commodity port in the world, handling almost 600 million tonnes of cargo annually. Comparatively, Jamaica handles a mere 1.8 million TEUs - just about 10,000 tonnes of air cargo.

In order to improve our numbers, Jamaican officials are going to have to determine the best locations possible for developing our hubs - from CHEC's proposals for the Goat Islands, to the Government's own plans for Fort Augusta in Kingston, Vernamfield in Clarendon, Cow Bay in St Thomas, and more.

Determining the right location requires strategic analysis, but the key factor to consider when choosing a spot is proximity to modes of transportation - railway, motorway, seaway and airway. This is vital in order to ensure that the goods move through the hub in the most timely and efficient manner.

The certainty of environmental manipulation is the reason environmentalists are up in arms about the potential development in the Portland Bight area. These potential environmental risks include dredging the ocean floor to create or expand berth space for ships; the creation of roadways - none currently exists between the Goat Islands and mainland Jamaica; the construction of warehouses, which will involve the removal of flora from hundreds of acres of land, also displacing fauna from their natural habitat. Additionally, there will be air and water pollution in areas that used to be largely undisturbed.

Making the case for sustainable development

For their part, the Chinese investors stated in an August Gleaner report that they are prepared to honour their environmental and social responsibilities in return for the opportunity to make the investment. However, the characteristics of logistics hardly lend themselves to environmental protection. Drs Jean-Paul Rodrigue, Brian Slack and Claude Comtois of Hofstra University in New York have written that the idea of 'green logistics' is paradoxical. For instance, time is often the essence in this industry and, unfortunately, achieving maximum efficiency "is mainly achieved by using the most polluting and least energy efficient transportation modes." Nonetheless, they argue that it is possible to practise 'green logistics' utilising the following approaches:

Top-down - where 'greenness' is imposed on the logistic industry by government policies through regulations;

Bottom-up - where environmental improvements come from within the industry itself through the adoption of best practices;

Compromise between the government and industry, notably through certification schemes.

One notable example of green logistics comes from Singapore, where SDV, a global supply-chain management com-pany, opened its first green warehouse facility in 2012. Among its key features are: building orientation and design to help with thermal insulation and energy and water efficiency including innovative lighting technologies and rainwater harvesting, respectively. We can also look at CEVA Logistics, another global supply-chain management company with operations in Singapore, which recently began construction of its new LEED (Leadership in Energy and Environmental Design)-certified multi-user logistics centre.

With respect to the proposed Goat Islands hub, the Portland Bight area can perhaps handle further significant development, but strategic assessments of environmental choices and use of resources should be undertaken to not exacerbate existing problems or create new ones. The same due diligence must be taken with the other sites highlighted by the Government as Jamaica seeks to capitalise on this major opportunity for economic development.