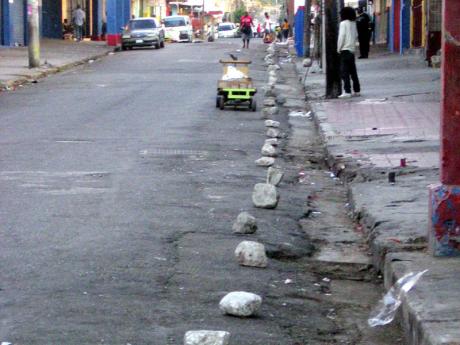 Extortionists use stones to mark their spots and force motorists to pay to park in downtown Kingston. - File

The Jamaica Constabulary Force is calling for Jamaicans to assist the police in breaking the back of extortion efforts across the island.

Extortion, also called 'shakedown', 'out wrestling' and 'exaction', is the crime of obtaining money, property, services, information or any item demanded from a person, entity, or institution, through force, threats, coercion or other unacceptable methods. The crime is commonly practised by organised criminal groups.

Police intelligence points to the practice existing in several parts of the country, as well as across a wider range of commercial undertakings and households.

In a statement, the Constabulary Communication Network (CCN) said the practice was becoming endemic to the point where increasing numbers of business operators are viewing the payment of extortion as a part of the cost of doing business in Jamaica.

The police said they have had successes in effectively investigating and prosecuting extortionists, and desire to accelerate efforts with increased public support.

"Our efforts to investigate and arrest the perpetrators of extortion are hampered by the reluctance of victims to report incidents of extortion to the police, or to cooperate in the court proceedings," stated the CCN.

"At times, victims attempt to act prematurely by meeting the demands before informing the police. Many times, victims show no interest in police investigations and even refuse to point out suspects at identification parades when requested by the police."

The CCN noted that many business operators and large establishments have closed-circuit television which are fully operational, but still refuse to cooperate with the investigation out of fear of reprisal from extortionists.

"The continuation of these activities is contributing to high crime rates, as the funds from extortion are used to finance the purchasing of guns and ammunition which are used to commit other crimes," the CCN said.

"Consequently, preventing extortion limits the commission of several other serious crimes, as it cuts the financed resources going to criminals."

The CCN said the ability of the police to arrest and charge perpetrators of extortion was limited without the support of the victims, and argued that suppressing and eliminating extortion was not exclusively the work of the police.

Said CCN: "The fact is that even under the most favourable circumstances, the ability of the police to act to prevent this crime is limited without support from victims."